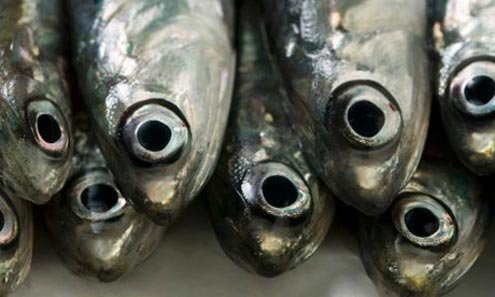 Take a big bite of a fresh warm anchovy.
W

hen did succulent fruits, delicious vegetables, fresh meat, fish, poultry, sugar, flour and practically all dairy products become the objects of derision, loathing, and fear? Why do so few people enjoy eating everything in moderation without endlessly analyzing how what they’re eating might affect their lives? More people than ever worry about allergies that medically don’t exist. Many now have real or imagined reactions to foods that were once the staples of anyone’s normal, healthy diet — fish, meat, milk, bread, cheese and fruit.

At this point it’s important to distinguish between which concerns are real which ones are borderline neurotic.

An example: Celiac disease, an autoimmune disorder provoked by gluten, is a real ailment, at least for some. They often respond to the gluten in foods but not the gluten contained in cosmetics or other products. According to one study, approximately one in 135 Americans suffers from celiac disease.

That’s not really a high figure, yet many profess to have some form of gluten intolerance, mostly based on what they’ve read on the web rather than any information from a doctor. I owned an artisan bread business for 10 years and remember one particularly intense anti-wheat, anti-gluten craze in which it seemed everyone on the block suffered from celiac or gluten intolerance (fortunately it didn’t last long).

Our company gave away free samples of our delicious olive, hazelnut or rosemary breads in supermarkets. Whenever someone turned down a sample I’d ask why? (I’m just going to say it: our breads were pretty wonderful). Many responded that they were “allergic” to gluten or wheat or nuts or olives or, god forbid, olive oil; others that they didn’t want to eat so much fat and sugar. It didn’t seem to matter when I told them our bread didn’t have fat or sugar, just olive oil, olives or nuts. Most bread is flour, water and yeast. Not even that worked. I can’t count how many times I would hear, “I’m allergic to yeast — it gives me yeast infections.” Absolute hogwash, as any doctor will confirm, but old beliefs can die hard.

But being allergic to something, aside from any real condition, was clearly starting to be all rage. So why not start with bread, the basic staff of life? Glancing in the supermarket baskets of the people with imaginary allergies but a very real fear of food, I’d often see processed cheeses and other foods with an ingredient chart that seemed to cover the whole package. Frozen desserts had stabilizers, fake flavorings, and worse. Diet sodas of all kinds were filled with aspartame, saccharin or sorbitol, basically a chemical cocktail.

In another category are the foods that people eat willingly to make them skinnier or fatter or taller or sexier or more energetic or less depressed (or often, more depressed). These include power bars, overly sugared energy drinks, and a list of non-fat synthetic sauces and dressings that can cover a supermarket aisle.

There now so many reasons for eating or not eating certain foods that the simple pleasure of enjoying a tomato (good for the prostate and ostensibly why so few Italian males have trouble with it, the prostate, that is, not the tomato), or a banana (a great source of potassium), or an ounce or two of dark chocolate (women should have chocolate daily), is obscured by myriad me-and-my-mirror arguments about the virtues or imagined vices of same.

“Cocoa contains flavonoids, which have antioxidant properties and can suppress oxidation of low-density lipoprotein [‘bad’ cholesterol] which can cause cardiovascular disease [including stroke],” reads a portion of a recent study by Susanna Larsson, an associate professor in the division of nutritional epidemiology at the Karolinska Institute in Stockholm.

Great, wonderful news, but the pleasure of eating something good is often lost in exaggerated analysis about what you’re putting in your mouth, and why.

I recently saw a great sign in a friend’s dining room in France: Today’s Special: Take it or Leave it. Forbidden at our table as part of a new executive order are discussions of why something is healthy not healthy, fattening or thinning, life-extended or life-shortening. I’ll wait as long as it takes for someone to take a big bite of a fresh warm anchovy (too much salt?), focaccia (too much olive oil? flour? yeast?), and simply say, “I just love bread; it tastes so good!”

Then I hope they’ll take a big swig of red wine. A perfect match.