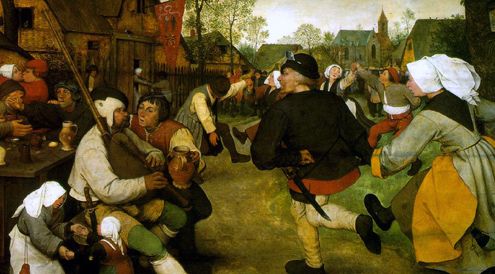 Brueghel’s “The Peasant Dance” conjures up the spirit of the Roman Lupercalia.
V

alentine’s Day was one of my family’s most important holidays. I loved it. In grade school, a mysterious box was decorated with hearts and flowers and a rectangular slit cut into its lid so we could drop in our handmade, frilly or foolish valentines. It marked the beginning of yearning. Though we were only 10 or 11, we’d already developed devilish designs on our prey. Like Matisse at work on a collage, we labored earnestly with colored cardboard and sticky paper doilies. To our favorites, we gave heart-shaped cookies and Hershey kisses. They were embarrassed and naïve.

I wonder how many lovers know that as early as the fourth century BC the Romans held a February matchmaking lottery. As an offering to the shepherd god Lupercus, the names of available virgins were placed in an urn from which would-be suitors could draw. The Lupercalia, or “Wolf Festival,” was primitive, male dating (and fertility) service. From the urn, men got the identities of companions with whom they could cavort for the next year, often leading to marriage (for more, see Charles Panati fascinating “Panati’s Extraordinary Origins of Everyday Things.”)

This fascinating back-story makes me wonder just what those lovesick Romans might have feasted upon during these rollicking Lupercalia. What Valentine vittles screwed young men’s courage to the sticking place, so to speak, and what succulent surprises stimulated Lupercian celebrants to frolic in February?

Having once created a menu for The American Wine and Food Society with the food historian Charles Perry at an event called “Italy Before the Tomato,” I can offer a few basics for an X-rated Valentine’s Eve. Wine starts the fête: Wine, wine, and more wine. It warms the cockles and lowers inhibition better than any Cosmo tips. Interestingly, wine was watered down for centuries: Drinking it full-strength was considered coarse and barbaric. Maybe Rome’s decline came when it ditched the diluting!

Poorer lovers passed the evening with wine, bread and cheese while the wealthy dined on fish, shellfish and crustaceans along with a favorite — eel (appropriate to a hint of amour). Small animals were often stuffed into larger ones, then roasted or broiled, while other foods were often cooked with honey and vinegar to create a stimulating sweet and sour flavor. Preserving food wasn’t easy, and to avoid food poisoning, many ingredients were kept in vinegar, sugar, salt, or just smoked.

No doubt a beautiful feast enjoyed amid the splendor of Rome could be an alluring first step to love. To give them energy for the night’s revelry, maidens were wooed with fresh oysters, ripe figs and exotic concoctions of honey, nuts and fresh cheese. The presence of nearly-nude servers and entertainers, the eye-candy of the time, didn’t hurt.

Of course, modern lovers of love’s finest day can find all the basics for a feast in any Roman market. Still, I’d like to think that the real food of love is love itself. Offer all the delectables you like, but start with a little dish of passion. That way you may not have to shell the oysters.