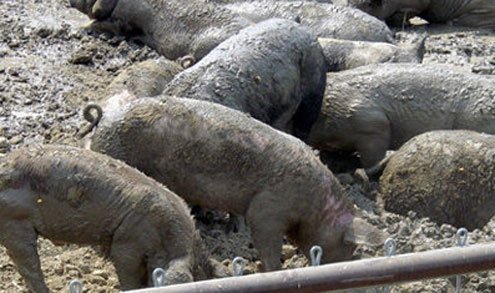 American mega-farms are home to millions of hogs, and their waste.
I

’ve always maintained something of a “don’t ask, don’t tell” attitude toward cheap supermarket food. That may be because when you have five children, low cost milk and three-euro chickens is a big feature of daily life. It helps to know you know you can get several meals out of a chicken (and one for the dog). You just don’t probe too deeply into how your chicken gets onto your plate. Or how your milk makes it into a glass.

Unfortunately, plans are afoot to introduce American-style mega-farms into the UK. When the debate is about your home country, even an expat ostrich has to get its head out of the sand. The thought of a dairy farm with some 32,000 cows stuck in barns with no access to pastureland seemed to me a scary prospect.

For other ostriches, let me fill you in. A farmer in Wales has just received the go-ahead to expand his farm from 300 to a 1,000 cows after a two-year effort to convince local officials his project was humane and sound (and would generate a lot of local income). Nocton Dairies, a British company, tried for three years to build an 8,000-cow facility in east England, ending its efforts in 2011. By then, the seed was planted.

I did some research into mega-dairies (the U.S. has mega-farms of all kinds), admittedly determined to find untenable animal conditions. But I have to say the cows I saw in a video report looked pretty content. They could move about, were clean, and seemed relaxed.

Seen from the air, however, some of these facilities looked pretty hellish. Huge barns were surrounded by “lagoons” of manure (can you think of anything less like a lagoon?); prairies planted with the soy and grain required to feed the cows didn’t have a hedgerow or a tree in sight. The reporter inside the helicopter said “it stinks up here,” so just imagine what it was like on the ground.

Which brings us to the environmental impact of these farms. On my Italian farm I keep three horses, a couple of pigs and some chickens. Their environmental impact consists of two words: they smell. I can only begin to imagine the smell of 32,000 cows. But I assumed mega-farmers had a more sophisticated way of dealing with the problem. Astonishingly, the answer was no, they don’t.

In North Carolina, for example, 10 million hogs live a miserable life in “confined operations.” They produce 19 million tons of manure every year, most stored in clay-lined pits. I challenge anybody to stand in a shed with 50 pigs, or even chickens, for five minutes. Being around thousands is incomprehensible.

Working conditions are difficult and accidents happen. In 1995, heavy North Carolina rains caused a hog manure lagoon to burst, dumping 25 million gallons of feces and urine into the state’s New River and killing millions of fish. It’s not all bad news, however. Some of these farms are converting the manure into methane gas, though they remain in the minority.

There’s also the matter of landscape. One of the supreme ironies of confining grazing animals is that you’re compelled to spend considerable resources feeding them with soy, cereals and fishmeal, all of which demands lots and lots of water.

Why then the boom in mega-farms? The argument is that farmers need to produce more food to meet the demands of a growing population that doesn’t want to spend more. But is this really true? Slow Food and similar organizations are gaining worldwide recognition with methods and products, which don’t come cheaply. We also need to consider that population isn’t only growing in numbers but also in size. Obesity levels, with their well-documented health implications, are causing international concern and Lincolnshire, where the Nocton Dairy site would have been built, just won the dubious accolade as Britain’s second fattest county: a staggering 73.8 percent of the population is overweight or obese. The last thing they need is cheap dairy products and their wealth of calories.

I head to the supermarket later today. But I have the feeling my shopping will take an awful lot longer than usual. I suddenly feel the need to think more carefully about what I’m buying, and where it comes from.