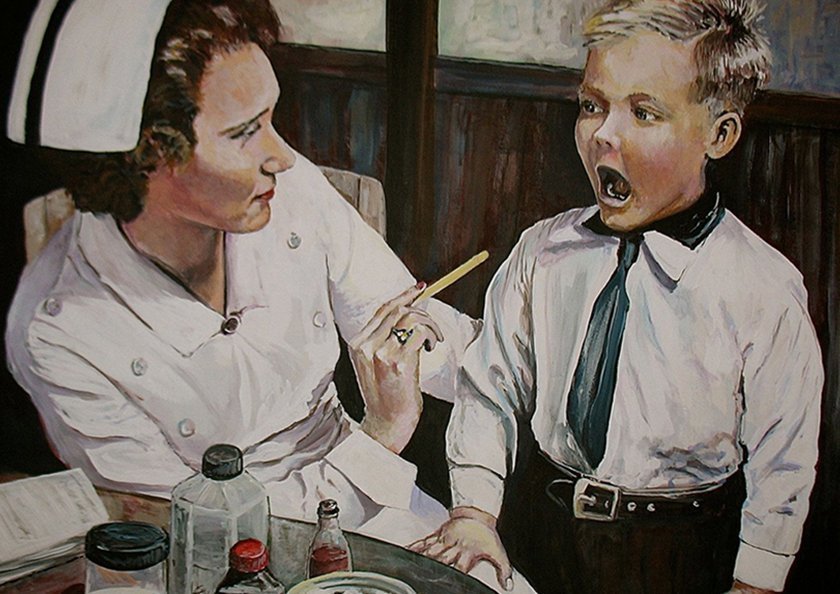 The school nurse was a stalwart line of defense against pretenders.
W

hen I first arrived in the United States I was saddened to find out that one of my favorite French words, grippe, was known in English as the “foo.” Grippe had gumption, and sounded like what it meant, being jammed up. All kinds of action, real and imagined, made haste around that word. But “foo”? Who of any substance could try to convince their parents they were coming down with something serious if forced to refer to such an unambitious word? Foo’s closest French equivalent was fou, or crazy. Just what I thought foo was. And no, I had yet to learn about the “l,” but did it matter?

Still, at my elementary school, where we were taught in English to “unlearn” French, I decided I should play by my new country’s rules and make things unequivocally clear when I visited the nurse.

She laughed in a shrill sort of way.

I thought to myself, What manner of country is this? Here I was, age seven and surely at mortal risk, but the nurse was laughing at me, and at my Foo.

Grippe, I added, and she calmed down, asking me what I felt.

So I began, haltingly, since I’d rehearsed the details of my affliction: “Hot, sore, mouth mal,” I explained, pulling her hand to my forehead (which I had rubbed vigorously before seeing her).

She took my temperature, examined me without tenderness, and told me to go back to class. “You do not have the flu, you just want to go home, and I do not send boys home for stories.” And she sent me back to class.

I wanted to correct her – Foo, not flu – but she expelled me too quickly.

Once back in my loathed classroom I tried again, this time in our run around time, called ree-cess. I confronted our teacher, Madame Newyen (she was from Vietnam, a place situated south or east of France and where the letters n, g, and y could actually be in a name, though I ignored them).

Here I was, age seven and at mortal risk, but the nurse was laughing atme.

I told Madame Newyen all about my travails and she listened patiently, with interest even, as if my (newly rubbed) forehead was beginning to have some effect on her, its pinkishness intended to prove the severity of my heated-up malady.

I kept speaking to Madame Newyen until I ran out of things to say in either English or French.

This is when she sighed in words she seemed have to clipped out for the occasion.

“You know, little boy, that in my country many people are truly sick and yet they go on because they cannot give excuses or make up little dreams.”

Her country? No, this was not possible. Vietnam was south or east of France. But Madame Newyen did not relent.

“Little boy, this faking is what you should never do because the world contains too many little boys and girls in peril. Even if you are unwell you should summon the strength to stay until your class is over. Only this way, little boy, will you be brave.”

I pondered “peril” and “summon,” neither of which I knew, but assumed they must in some way relate to the Foo.

So I pointed at myself and said, “Foo!”

“No, little boy,” she replied. “The word you mean is fool. This is why you are in school.”

I was not sent home. I did have to endure until class ended. On the school bus home, when the driver asked how I felt, I explained I decided to adopt Madame Newyen’s dictionary and told him I had the Fool. The driver agreed that I did, or was, and that cheered me. At least someone believed me.

“No, little boy. The word you mean is fool. This is why you are in school.”

Many years passed before I stopped insisting I might have the Foo or the Fool, or even grippe.

In those years I learned it was a bad idea to play with serious conditions. People believed you less. Better to say you had a sore ear, or throat.

I also learned that playing the calamity card didn’t advance my cause, because if anyone by chance believed you they usually ended up locking you in your bedroom and calling the doctor. Doing the Foo in a doctor’s presence required acting skills I lacked.

About a decade later, when I was in my teens, malignancies decided to make homes in my father’s body, a hostile occupation he would not in general discuss, as if to do so was to dignify an enemy whose very name produced alarm. He grew weaker and weaker but still insisted on taking me on trips, “while I still can,” he said, absent the illness theatrics on which these times depend.

Before he died, in one of our final conversations, he said:

“This is a good time to go, since we all must go. Seventy-four years is a long time. It’s time to step aside and leave you to live in the world. Keep your wits about you. Never lose your head. Know that despite any upheaval, bad times will be followed by better ones.”

I asked him by way of response to please not die, but, like the laughing nurse, he ignored me.

But I heard what he said, and so far I have kept extremes at bay, since Foo passes, as does life eventually, and it’s best not to cower before that truth lest your forehead grow inflamed, no rubbing necessary.