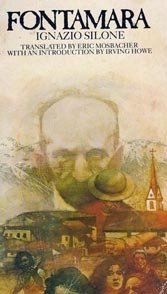 By Ignazio Silone, translated from the Italian by Eric Mosbacher

n a June day in the 1920s the destitute Abruzzo mountain town of Fontamara has its electricity cut off. The town’s bedraggled and bedeviled peasants, the cafoni, assume it’s related to money. They’ve probably failed to pay some arcane tax. But things only get worse. A newly-potent local bigwig known only as The Constructor arbitrarily diverts two-thirds of the town’s irrigated water, assuring the townsfolk they’ll get the remaining two-thirds. Yet even the poorest of the poor know that two two-thirds don’t make a whole. They’ve been had. Something odd is afoot. But what? Soon it gets a name, fascism, which the Abruzzo-born Silone (née Secondo Tranquilli) loathed more than even the Catholic Church.

His melancholy if propagandistic account of a medieval southern town absurdly charged with subversion and forced to kowtow to Fascist whim is a marvelous look at “progress” as horror. The local priest, Don Abbachio (Father Lamb), is no help at all. His affection for the peasantry is up for sale, as is that of the local lawyer and protector, Don Circonstanze (Lord Circumstance).

Silone’s account possesses a painful timelessness because the opportunism and connivance he associates with Italian character endure today, albeit more insidiously. Gone are the days when Mussolini burrowed into the fissures between haves and have nots, conferring handsome black shirts and truncheon-wielding importance to those willing to turn on their own, “to rob and oppress other poor men…” Yet the every man for himself ethos that underlies the worst of the abuse hasn’t changed.

Communist-leaning Silone was in Davos, Switzerland exile when he wrote this macabre account of institutional foul play. Blank sheets are circulated among the peasants with orders that they sign at the bottom; the text, they’re told, will be filled in later. They comply, but their signatures are used against them (“Every word spoken by these gentry, every one of their gestures, stank of fraud.”)

Mussolini was still something of a western curio item when the book was first published in 1933. Silone’s novel, along with the Spanish Civil War, changed perceptions. His peasant narrator is a composite of father, mother and son, each forced to reckon with misery turned capricious and violent, leaving the village “as helpless and vulnerable as a worm on the surface of the earth.”

Revisionist allegations aside (some claim Silone was a government informant), “Fontamara” remains vital reading for those interested in the growth of totalitarianism and the tactics of divide and conquer.