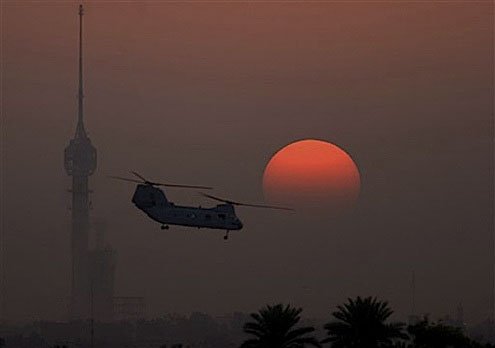 You have an identity crisis.

Whose war are you?

Who needs you, who wants you, who can’t live without you?

You are harm’s way.

You don’t know what you mean to yourself, if you’re worth it, how you started yourself.

You don’t know if to stop.

Your momentum is lonely to everyone not at you.

Pretend you are American. What do you say?

You are about freedom. Yes, you can say that. You exist to enlighten future generations. Why not? Say that too. You are noble because you exist on behalf of those who need you. Harder. You don’t remember how you came to be.

This is because you’ve never been to America. Those who sent you don’t know you. Not close up. You wouldn’t recognize yourself in America. This confuses you, and those who fight you. Your makers should know you better. To know you explains your self-loathing. To mention peace in your name makes you dizzy. How can they?

Pretend you are Iraqi. What then?

You might say you are … what? A test? Yes, a test. You could call yourself means to an end, an opening to … what? Democracy? Rule of law? Possibly. You are, after all, an agent of history.

So you ask yourself: What might history have in mind?

Leaving only the promise of you.

You might adore yourself if weariness didn’t kick in. But it does.

You tire of the invaders as you tire of the rebels. You are bored by the misery in the middle. If you could be sad, you might be.

But that’s not up to you.

The invaders believe in themselves, and use you; the rebels respond in kind, and use you. All the others just want you to go.

But you can’t, so you harm by rote. You’re good at that.

You got rid of a dictator, say the Americans. “I’m pleased,” you answer, before arming a mine.

You embody our resentment, says the other side. “Glad to help,” you say laconically, harvesting corneas from sand.

It hurts to have such raw talent.

You will end at some point, or so one side or another will announce as much. They adore thinking they’ve found your alternative.

But they’ll be wrong again. You’ll change shape at their behest.

Peace is a time when most choose not to recognize you, when you go underground. You lie to yourself that you don’t exist, to efface the truth. But you just change scale. Or operate timidly, selectively. You’re a quarrel in waiting, a submerged remission with clout.

For now, though, there’s no relief in sight. You have too many practitioners. You’re thrillingly ugly. You’re a thing all wish to discuss. You’re supremely front and center. You are, by all account, quite perfect.

But sometimes — and who’s around to hear this confession? — the strangest mood afflicts you.

You want to end it.

You, a war, want to erase yourself.

You want to borrow from the strategy of your clients.

You want to go to a honored place.

But there is no such place.

And you find it ironic, even comical, that a war would want to end itself.

But no one would ever believe you if you told them.

Because they don’t listen, too busy fondling you.

And you never say no.