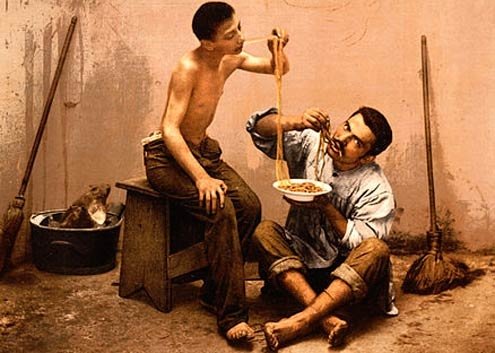 Naples: A city with rhythms of its own.
I

n Naples, nighttime temperatures are finally dipping into the low 50s (about eight degrees Celsius), and along with the rest of southern Italy I probably look as if I’m about to hop a plane to a Swiss ski resort. Although tomorrow’s high is 61 (16C), you won’t find me outside wearing anything less than an overcoat, hat, scarf, gloves, and knee-high boots.

Southern Italians are mocked by foreigners — particularly by American expatriates — for their layers of clothing. It’s odd at first seeing people who live in semi-tropical climate walking past lines of palm trees wearing boots, puffball hats, and coats that look like well-fitted sleeping bags.

I didn’t get it either when I first arrived from the Pacific Northwest, whose mild, wet winters are similar to Naples (though a touch colder) and where I’d never needed to wear a full-on winter ensemble. An overcoat over my year-round work wardrobe was enough to survive most winters — no scarf, hat and gloves required.

Yet my first Naples winter made me change my ways. Suddenly I considered several pairs of Italian leather boots a necessity, not a fashion statement. Misplacing a glove in the morning was an immediate crisis.

What changed? In a fundamental way, I became Neapolitan: I began spending hours and hours outside. To socialize, I’d sit at outdoor cafes and walk everywhere, instead of simply hopping between heated offices, restaurants and cars.

I soon understood the need to wear snowboarding gear. I was no longer trying to survive the outdoors; instead, I was trying to make myself fully comfortable outdoors — for hours, if necessary — so that I could participate more fully in the wonderful spectacle that is Neapolitan life.

Habits that once seemed like cultural eccentricities found a home in me. For example, ducking in a coffee bar for 30 minutes to escape rain once seemed bizarre. (“Don’t these people have places to be?” I wondered. “It rains in Seattle, but we still show up for appointments on time.”) Then, one October, I got caught in a raging Naples rainstorm, which — though it lasted only 15 minutes — was torrential enough to ruin my entire day. While the caffè-drinking Neapolitans later emerged into the sunshine nice and dry, I stayed wet and cold for hours. Suddenly, sipping espresso while waiting for the rain to stop made a great deal of sense.

So what happens now, as I get ready to return to United States, with some Neapolitan ways having become second nature? I’ll probably need to shake off a few of them, or face the risk of being seen as an eccentric.

Take the staring. Part of the culture of Naples involves a heavy dose of people-watching, which can seem like an unwelcome amount of eye contact to the uninitiated eye. At first, I wondered if the dozens of Neapolitan eyes boring into me meant something sinister, perhaps that people here didn’t approve of my husband and I, a mixed-race couple. An elderly woman who examined us one morning while walking by our outdoor café table helped change that.

I also became a starer. I looked at people clothes, their babies, their dogs. It soon became one of my favorite Neapolitan outdoor pastimes.

I don’t see that as working out in Washington State, where stares might seem confrontational or judgmental. Nor will an average rainstorm suffice as an excuse for lateness. (I’ll have to unlearn that one, though the lack of delicious espresso should make that easier.)

I will also have to stop singing, at least outside my car and shower. Many Neapolitans, particularly male shopkeepers, sing their way through the day. It always made me smile. After hearing Italian opera and Neapolitan folksongs, I, too, found myself singing or humming as I walked down the street.

It wasn’t uncommon for someone to hear me and join in, joining in the same tune and smiling. Doing that at a grocery store in Seattle or Tacoma? I don’t think so. I’d be the weird girl singing in the produce aisle.

So leaving Naples brings regret. I’ll miss the parade living its outdoor life despite the chilly weather. I’ll miss the people packed together in the coffee bar during a rainstorm. Most of all, I’ll miss the thrill of learning something daily, and the people who took time out to show me that the ways of an another culture can be just as valid and sensible as ones I was brought up to know.