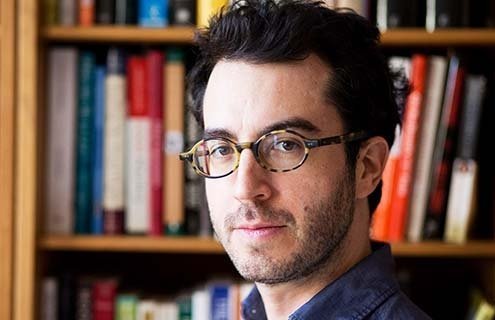 Here I Am is Jonathan Safran Foer's first novel in 11 years.
J

onathan Safran Foer’s third novel, “Here I Am” (Farrar, Strauss and Giroux, 2016) opens with a six-word bang. “Before the destruction of Israel commenced.” Only in mid-fiction does the teaser play out: an earthquake under the Dead Sea followed by a massive conflict between Arab militias and Israel, which stumbles into a stalemate. Two Jewish families, the American Blochs and the Israel Bloch/Blumenbergs, must now decide: What does Israel signify for a Jew?

From page one, Foer amasses Jewish issues of Jewish identity to drape on his multi-character, all-Jewish cast. A cast that, by the way, is mainly male. Maybe — let the reader decide — because the matters at hand are tied to ancient the Hebrew traditions of male-guided Tribes.

As children in World War II Europe, Isaac and his cousin escaped Nazi patrols by hiding for 200 days in a cramped hole in the ground. Isaac’s message: They have always hated us, and always will. At war’s end, he moved to America while he cousin went to Israel, and never forgave Isaac his choice.

Isaac’s son Irving is a loud pro-Israel blogger and journalist, who evolves his father’s legacy to: Get them before they get us.

Now moving into middle age, Jacob is an insecure neurotic. No wonder, given the scary, raging and extremist life-scripts his granddad and dad had on offer. Sadly, the insecurity — fearful and neutered — is destroying his marriage to Julia.

Initially that couple’s failure seems a clichéd midlife breakdown. Finally, though, Foer starts to build to its emotional climax and begins gripping his reader. Their frayed relationship is the glue that holds together he myriad characters and gives plot ramifications their sense.

At their marriage, Jacob and Julia were deeply devoted to Hebrew rituals. Now, they resolutely educate their three boys at a private Jewish Shul. But in-family observances have faded, along with the couple’s private goals. Once a prize-winning novelist, Jacob now scripts a noisy TV series; Julia’s training as an architect is reduced to private dream sketches.

Benjy asks Jacob, “Am I going to die?”

“That means yes doesn’t it?”

But it’s Spectacular Sam who hogs the plot’s attention. In part that’s because he realistically — and scarily — resembles millennial kids. He’s smart and “knows” his real life lies in his computer. There, his female avatar Samantha builds, destroys and manages his digital “Other World.”

Sam also happens to provide a key plot twist. He’s preparing for his bar mitzvah. Julia and Jacob still hold that a Jew must complete this vital rite of passage. But Sam, deep in his Other World, it seems irrelevant. He carelessly he runs afoul of his Shul and Synagogue rabbi, forcing Julia and Jacob to make arrangements with a very different rabbi. Just in time, since the two Israeli Bloch/Blumenberg cousins are arriving for the celebration.

By the time ceremony is held, Isaac has died. The new, young, and unfamiliar rabbi officiates and ends up providing more surprises than just his unlaced sneakers. His reflection on what it means to be a Jew focuses on a mesmerizing examination of “righteousness.” The segment also explains Foer’s title, a reference to Abraham’s comments in the Book of Genesis. When God calls Abraham to sacrifice his own son, “Here I Am” is the patriarch’s unconditional response. Yet Abraham also replies “Here I am” when his son asks for reassurance. In these different but equally binding moral obligations, Abraham represents the ancient Judaic ideal of a strictly ethical life.

Righteousness is a tough subject. Following in the oral and written Jewish tradition, Foer’s cast ponders it relentlessly. The visiting Israeli males, coming from that country’s terrorist-menaced cities, insist that the common identity of two families lies in their race’s long history of being made into victims.

At this juncture, Foer’s long lead-up to the Arab-Israel standoff reaches turns actual. He brilliantly uses alternating media reports to flesh out the raging crisis. The cousins expect Jacob to go with them on the plane to Israel, where he must fight for “the real homeland.”

If so many characters and life stories seem too much, Foer’s narrative shifts and stylistic turns give his novel a vivid flow. He’s also a master of character nuance and voice. His actors are eccentric, troubled and wonderfully human.

If his characters’ search for self depends on their Judaic identity, Foer’s more insistent and poignant ethical concern is deeper and more universal: What is it, really, that makes a life worthwhile?