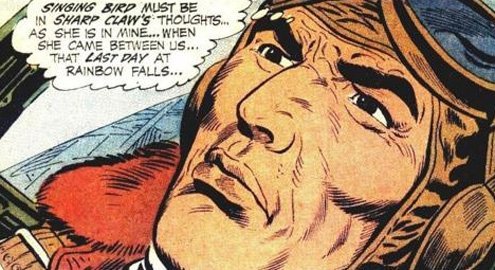 ne summer I was almost 12. I had no phone and no computer. Even TV was off limits. I had yet to invent compulsive access to all things, otherwise known as the future. This left me, myself and I — along with a few rodent-like squirrel friends and the occasional visiting rabbit. How then, I wondered now, did I survive a slow weekend day as a boy in this ancient, non-cyber before?

So I intrepidly set about reconstructing a day, gradually recreating the details of one long-ago Sunday in July, teasing out slivers of the Jurassic Era known as boyhood.

The first I did was wake and examine my ship models on the shelf near my bed. I then went downstairs and glanced at the newspaper articles my father had circled for me for mental nourishment. Bored with these (I invariably was), I retreated to the living room to read one of my Flying Cloud comics, about a Navajo aviator in World War II who sees his ancestors in the clouds. He’s brave and moral and burdened (like most heroes). He flies the most beautiful of all planes, the P-51, whose details I pause to think about always.

When I’m done with Flying Cloud I go the basement, my shop of wonders, and play first with my Strombecker road race set, little cars on a long electric track I’ve spent months building along the damp cement floor.

I also talk and flirt with the cats, my dozen Siamese, parents Mona and Monina gazing at me warily as only cats know to do, recognizing my loneliness, or aloneness, but by now surely tired of it. I hiss in fluent cat to the runty children, a few of who are perched in the beams.

I then leave the basement and head for the back yard. I know my father has gone out for a walk. I am blissfully alone. So I take up strategic station beside the apple tree and toss pebbles at the big pear-like hornets’ nest. They spill out like so many commas but can’t see me behind the tree. Bees need glasses, I shout aloud, laughing. But now they come in swarms. I sprint to the screen door just in time to shut if before the first big bug arrives.

Now I am bored. It’s noon. Enterprise is called for. I go up the stairs to my bedroom and climb out the window onto the ledge. From there, I scuttle up beside the craggy downspout to the roof. Once atop the house I close my eyes and speak in pigeon, in jay, in robin (all variations on cat). I salute the squirrels below. The roof scaled, I climb down and mount the pine tree out front. From its upper branches I can throw acorns at cars, but I don’t. I’ve been caught before. I now understand consequences.

Weary with activity but only midway into afternoon, I sneak back into the kitchen and snack on Jell-O powder, my tongue turning red. I can now look at this strange transformed self in the mirror and wonder what it might be like to be a Martian, a Venusian, a me.

I ponder and wonder and do it again. I play secret baseball on the front porch, throwing a tennis ball against alabaster colored wall and pretend to be a great baseball pitcher, the fans in the stands applauding. I swell with inner esteem. I can conquer the world.

In the late afternoon my day suddenly grows complex, uneven. I am no longer alone but with my friend Andy. Andy and I usually talk about planes and cars and the history of battles, but today Andy has me meet his older brother Drew, who is 16 and had a harelip. Drew takes Andy and me to the alley, where a few other older boys have gathered near the great ditch, as I call it, a patch of dead earth behind an ivy-covered garage.

There, suddenly, a girl materializes. Betsy is her name. Drew tells us Betsy will let us touch her but we need to give him a quarter. But I don’t speak girl.

Touch what? I ask.

Another boy forks over a quarter and placid Betsy pulls up her blouse.

On this hot Jurassic day in July I see her skin and the small mounds and struggle to breathe. I bolt and run back home. I immediately again begin reading Flying Cloud.

He is at 10,000-feet. A lone damaged German plane is in front of him. He could easily shoot it down. But his cloud-shaped forefathers intervene. What is called for is mercy, clemency, and he veers away, letting the crippled plane survive. I think about this into dinner. I think about it so much, this matter of clemency, the choice to not do harm, that I still think about it today.

So that is what I did one day in the age before smartness, when the days belonged to me, when I thought for myself.