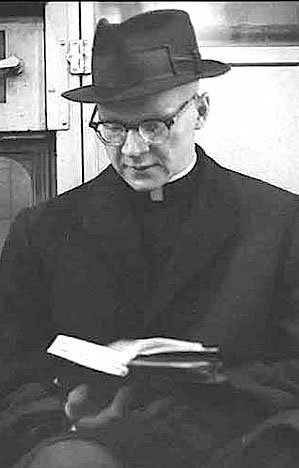 Western Catholicism is stopped cold because its emissaries have outlived their promise.
&

#8220;I’m here for the Easter blessing,” says the priest. I’m taken aback. I expected an appliance man returning with a magneto to fix a 20-year-old washing machine. Something about “flux,” he’d said ominously.

But instead of the flux-fixer, here’s the local priest.

I say the first thing that comes to mind, “I am not a believer.” Non credente.

He backs away, cocking his head like a reptile. “Have a nice day,” I add impossibly. The absurd follows like a puppy. “Buon lavoro,” I tell him, which roughly means “good work” but is close to, “good luck with it.” You might as well tell vegetarian, “Happy hunting!”

He has a sixth sense for skepticism and slides toward another door.

Now, I feel awkward. Did I seem haughty?

This in turn leads to other worries.

Would I have told anyone but the priest that I’m not a believer? Am I not a believer? Why not say, “Oh, right, you’re not the magneto man, are you?” or, “No, thank you, please don’t be offended, but I believe only in owls,” or, more to the point: “I didn’t ask you to come.”

But no, I’ve essentially told a Rome priest, my palm in his face, that I’m a weary Visigoth. Not even a macaroon for his trouble.

I consider the last priest I saw, in a TV movie about 9/11. He’s actually a fire department chaplain praying aloud alone in the lobby of one of the Twin Towers. “Our father…” he intones, after which there’s a flash of light, some mood music — disaster’s soundtrack— and he’s gone. The vaporized priest.

Have I vaporized my priest?

Not a good thing since they’re a vanishing breed. Europe’s distracted affluence discourages vow-taking (transubstantiation doesn’t make it to iPods) and American sex scandals don’t help. The Catholic Church’s best and brightest prowl the bone fields of rural Africa and Asia, where salvation is still a literal concern. Outland is faith’s best boutique, something Pope John Paul II recognized soon after 1989 and shaped his travels accordingly.

It’s nothing like Rome, the pagan capital of the Christian universe, where the profusion of churches disguises the mischief of city-dwellers who rarely worship and use confession as a sentimental anti-depressant. Otherwise, the relevance of Sunday Mass is limited to arranging an otherwise dispersed urban family. It’s hard to ask much else from a population deeply suspicious of its in-house multinational and resentful of its hiring practices (Catholic political parties still hobble in their own back yard.)

Easter, however, still belongs to throwbacks.

And my priest is a vestige. If he’s humorless, consider what he’s up against (including me). Believers are busy. Even those who stay for the blessing listen for the Bach-fugue ringing of their mobile phone.

My own phone never rings, all the more reason to acknowledge the priest: It’s only right that a man like me, a writer, listen to a man like him, the carrier of an ancient delivery system.

But I have my own archaic (and arcane) baggage.

The Titanic disaster obsessed me as a boy. My parents finally sent me to a psychologist, concerned I might have a death fascination (who doesn’t?).

The psychologist, a refugee from Yale Divinity School, humored me by asking if I knew that the band played “Nearer My God to Thee” as the ship sank. Did I ever.

Did he know, I rebutted, that the ordained clergy in the lifeboats were so transfixed by that sinking ship, a warped skyscraper wiggling out the ocean, that they forgot to pray aloud? Was he aware the White Star Line decided against sending the Olympic, the Titanic’s identical sister ship, to rescue survivors, fearing they might swoon at the Second Coming?

If I could find him now, I’d also mention that before the Twin Towers went up, a New York planning commission vetoed a single, 2,200-foot, 220-story structure as “beyond the realm of human imagination.” They worried such a building might destabilize the public and (never mind air traffic control) and appear to encroach on the holy.

For centuries, bigness intended deference. But the Titanic sank after which came the humbling slaughter of World War I. The French then built the Maginot Line which the Germans sneered at and bypassed. Meanwhile, the Holocaust and the Atom Bomb.

Mystery’s a tough customer when man grounds it again and again. No wonder Western Christianity hit a wall 100 years ago.

The benefit of postmodernism — to a church at least — might be that it actually suspends collective history. Distraction makes everyone even. History is what you get from the Web and TV. History is what’s made daily. From this, you know big things come tumbling down. You wish you didn’t. It’s all so scary.

An impressionable time should in theory revive the priestly dance, but it doesn’t.

Maybe it’s because materialism overloads human circuitry (ghosts of communism past). Or because the Christian God has writer’s block. Or that radical Islamists give all faith a bad name.

Western Catholicism is stopped cold because its emissaries have outlived their promise. They were crafted to stir the disenfranchised and the dying, not persuade well-fed skeptics uninterested in the rewards of communion.

The church has no flux-fixer, no magneto man. It can’t even imagine repair.

Instead, at the door, stands an unessential man in an undistinguished uniform. There’s no reason left to acknowledge him. You can turn away and wish him luck. If luck is what it is.

Anything to get back to the screen, the ring-tone Bach, the iPod, the washing machine. Until they, too, run out of steam.