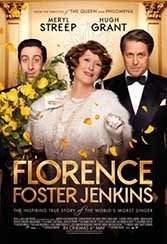 Moviegoers will recognize Florence Foster Jenkins as finely crafted, thoroughly engaging Hollywood fare. It’s the based-on-a-true-story story of a woman who believed she could sing opera — and built a career that included the stage at Carnegie Hall, but could sing only very badly. Tense moments abound, as do tears of joy and sadness, not to mention an unpredictable turning point here and there. Meryl Streep (as Florence), Hugh Grant, and Simon Helberg (of “The Big Bang Theory”) are thrown a softball here, and they hit it out of the park. Yet for all its competent ordinariness, the film — or, rather, Florence’s story as it is presented by director Stephen Frears — raises thoughtful questions that set it apart.

Florence appears to have no idea that she can’t sing, and some of that lack of self-knowledge is attributable, it would seem, to what she hears in her head when she vocalizes. But some of it, too, has to do with her inability to understand the extravagant praise she receives from mentors and associates as overdone, fraudulent, a lie. How can that be? Don’t we all know when we receive comments that are too good to be true? The answer is no, we don’t. As psychologists have long understood, most people are strongly disposed to interpret everything positive said about them as reasonable and true — as over-the-top as it may seem from an “objective” point of view. In this respect, Florence is us — no more, no less.

Then there’s the matter of Florence’s devoted followers. Most of them, including Cole Porter and Enrico Caruso, knew she couldn’t sing yet were fans anyway. No doubt they liked her elaborate costumes, her stage presence, the sheer wackiness of it all. But why? The answer dips into history. Although Florence imagined herself as performing opera, for her admirers she belonged more to the melodramatic, crudely comic displays of vaudeville. Like Florence, vaudeville was on its deathbed in 1944, when the film is set, a victim of moving pictures, radio, new genres of popular music and, around the corner, television. Had she lived another decade, audiences would have entirely unwilling, indeed incapable, of appreciating what she was doing. She began presenting her tableaux vivants — performances with vaudevillian characteristics, although more “cultured,” in the 1910s, and she founded the Verdi Club in 1917 — when vaudeville was still a cultural force. For a time, then, her performances had resonance — but not as opera.