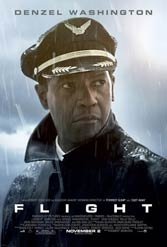 Put aside its lost souls leitmotif and director Robert Zemekis’ film is about a veteran airline pilot — and veteran drunk — whose inability to prevent a commercial jet crash triggers a slow trip down contrition lane, an age-old Hollywood theme. Along the way it’s also about attempted cover-ups, corporate connivance, and the ambiguously thin line between irresponsibility and genius.

In a forced twist, Zemeckis romantically pairs Whip with another addicted casualty, masseuse and former sex worker Nicole (Kelly Reilly), a hackneyed fallen angel introduced to redeem him. No luck. “The plane was fucked,” Whip tells loyalists and lawyers — and it was — but his rationalizations are franchises of denial.

Cool, calibrated and consistent Denzel ensures the film doesn’t wallow (though in the end it remains morality tale about life wakeup calls) and screenwriter John Gatins subversively introduces the idea that Whit’s coked-up flying instincts might have providentially prevented an even more catastrophic “Act of God,” a nifty ripple since the jet goes down on the grounds of a Pentecostal mission. John Goodman shines briefly as Harling Maze, Whip’s friend and pusher and the crash sequence, reminiscent of Ralph Nelson’s 1964 “Fate is the Hunter” (also about a pilot and alcohol), focuses as much on Whit as on aerial pyrotechnics, making it all the more credible, and terrifying.

But the moral is clear: Pride cometh not only before the fall, but also includes the fall itself.