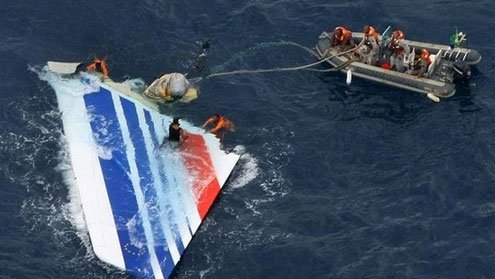 In 2009, after several false leads, the wreckage of Air France Flight 447 was finally found after five days.
S

everal years ago an American professional basketball player of Taiwanese descent enjoying a hugely successful season in New York City had a number of bad nights. When a local tabloid ran the headline: “Chinks in his armor,” America’s political correctness machinery wasted no time in accusing the paper of indulging in offensive stereotyping. A “chink,” which means a slit, is a derogatory nickname for Chinese immigrants that dates back two centuries.

The United States is more diligent than most countries in upholding racial and ethnic sensitivity, even if doing so unbalances the rhythms of language (clunky African-American ahead of the marginally acceptable black).

But such policing doesn’t restrain cultural relativism, which Herodotus once explained by saying, “Everyone without exception believes his own native customs, and the religion he was brought up in, to be the best.” Yet best-ness is a recipe for diehard judgment. The Western view of the Ukraine crisis — in which the only sensible vantage point is that Russia has misbehaved — is a case in point. A more insidious display is the angry scoffing in the wake of the disappearance of a Malaysian Airlines Boeing 777.

On March 8, a Saturday night, Flight 370 took off from Kuala Lumpur bound for Beijing. An hour later it inexplicably vanished from radar. All contact was lost. On board were 239 passengers and crew, most of them Chinese.

So far, the seemingly haphazard Malaysian search has generated confusion and bewilderment, lighting a short fuse under the West’s limited ability to tolerate what it perceives as incompetence, particularly when it doesn’t control the flow of events. As the benchmark for modern enlightenment, the West sees itself as a beacon for efficiency, fair play and answers, or the establishing of linear means to find them. Call it the “clear the cache, refresh the browser” view of life. China, the seat of a more ancient enlightenment, takes a similar if less rigid approach (it also has passenger families to answer to).

The result, in media terms, is a cultural collision as rude as chink-worry. Malaysian officials, lambasted for awful airport security, have since been the target of relentless criticism for “reticence and evasive answers.” Early impatience has turned openly testy. Why have Malaysian authorities dallied over clues? Why, in defiance of Western protocols, is the information stream limited, frustrating reporters? Why can’t those officially charged with knowing things — in this case the Malaysian military — just know more, and express themselves more directly, and more regularly?

In the movie version of the musical “My Fair Lady,” Rex Harrison sings a song called “Why can’t a woman be more like a man?” which in this cultural paradigm might be titled “Why can’t Asia be more like the West?” Where are answers on demand, and why have the needs of immediacy been bypassed or ignored (as in saying something even when you know nothing)? What kind of 21st-century culture fails to feed a global beast hungry for details?

Malaysia is clearly outmanned. Just as outmanned, however, is West’s ability to comprehend how much ocean south Asia encompasses, and how the ocean has a vexing way of hiding things even from the most earnest of satellites.

Missing planes drive the non-poetic West to distraction. Vanishing elicits an obsessive mixture of fascination and resentment from an empirical society unsettled by mysteries and thus doubly determined to solve them. The West and its societies are pledged to so-called “closure,” to endings, to sentimental contrivances, each lubricated by the swift transmission of answers, or, in their absence, the offering the real-time balm of expert speculation. Malaysia is implicitly portrayed as defying all these things — so are experts, whose realism is considered boring or defeatist, or both. “I have no feeling for what happened to this plane,” said David Learmount, who writes about flight operations and safety for an aviation magazine. “The number of possibilities is so massive that it’s completely pointless.”

But pointlessness annoys the West, particularly when it’s not playing at home. It sees it as a kind of anarchy.

Five years ago, the disappearance of an Air France jet over the South Atlantic while flying from Rio to Paris brought a different response. Why? Prestigious Air France held regular Paris media briefings, respecting the French bureaucratic tradition and all manner of secular sedation. Though the wreckage wasn’t found for five days, no one questioned effort or priorities. The Atlantic, mass media noted time and again, was immense. More importantly, the French dispatched navy vessels to the area where the plane might have gone down, satisfying the essential Western notion of “doing something,” in which the act matters as much as the result.

The Malaysians aren’t doing enough, or saying enough, or delivering enough usable sound bites. They meet riddles with riddles, in part because, they are less unnerved by (or sensitive to) bafflement — something else the West finds hard to fathom. Meantime, planes and ships of all nationalities examine vast Asian seas in search of clues.

And both the West and China grow angrier, the latter accusing Malaysia of “grave inconsistencies” by failing to respond in a timely, reliable way, in essence blaming Malaysia for giving south Asia a bad name. The words “damning” and “tragic” have also come up often. But whether national reliability can be measured in one way everywhere even Herodotus would have disputed.

Answers will emerge in due course, but they won’t paper over the new if unspoken white man’s burden self-shouldered by a self-righteous and tech-savvy media that mocks vagueness, demands real-time answers (or real-time chatter), and is quick to exploit chinks in the methods of those who dally, particularly if they don’t come from the West’s picket fence neighborhood.