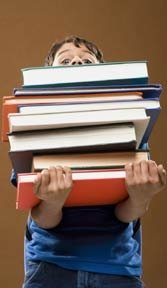 Pressure in Italy? Think again...
I

woke up in a cold sweat in the middle of last night, terrorized by the prospect of exams the following morning, for which I had somehow forgotten to revise. It’s a recurring nightmare, one which has haunted me for years since those thankfully long gone days when I was caught up on the endless treadmill of school exams, followed by university entrance and then, worst of all, finals.

I opened my eyes, groggy but deliriously happy this morning, realizing that it had all been a very bad dream and that I had nothing more taxing in front of me than to write a few articles, pick the children up from school and take the dog for a walk. But the sleepless night brought back chilling memories of more stressful times when, in my early teens, I would book a telephone alarm call for 4 a.m. so as to cram in some last minute studying. My parents vainly tried to talk me out of the dawn vigils, which I punctuated with regular shots of strong instant coffee laced with so much sugar that the spoon almost stood up in the cup.

In the end, even the man who took the booking for the alarm call tried to convince me that I would be better off getting some sleep. Stubbornly refusing all attempts to talk sense into me, I slogged on for weeks at a time, maniacally chanting poems from Baudelaire’s “Fleurs du Mal” under my breath and repeating Palmerston’s foreign policy in Afghanistan until I was blue in the face. A friend of mine was even worse. She used to arrive the morning of exams looking ashen faced and gripping a bottle of caffeine tablets. When I finally got to university it came as no real surprise to me that at least one undergraduate a year committed suicide in the run up to finals.

After such an angst-ridden childhood, you might think I would be glad that my own children seem to be taking a far more relaxed approach. Far from it! While my friends back in England complain there is far too much pressure on children, with even three-year-olds sitting tests for entrance to some private schools, I rather think the Italian schools have gone to the opposite extreme.

My son took his first ever exams at the ripe old age of nearly 14, and was unsurprisingly ill-prepared for the whole experience — though he didn’t seem as worried as I thought he should be. As the countdown approached, I suggested he might want to do some revision — maybe even get up a little earlier in the morning to cram in some extra studying? He assured me everything would be fine and settled down to play his electric guitar instead of getting out his schoolbooks. When the day came, I was more nervous than he was.

My husband was even worse, hiding round the corner in the school corridor as our son was put through his oral exam. As it turned out, rather irritatingly, I was wrong and my son was right. In Italy, even the teachers are kind-hearted, and failure is a dirty word. Seeing the boy was in some difficulty, his teachers had the bright idea of offering him the chance to tell them all he knew about his given subjects in English, instead of Italian.

They can have had very little idea of what he was saying, as he babbled on at a speed that almost certainly outstripped their level of comprehension, and he emerged triumphant with a very respectable pass. “I don’t know what all the fuss is about. Exams are dead easy,” he said coolly as he collected his results.

More recently I had an exam of my own to endure as part of a qualification to become a guide and take people out horse riding. True to form, I learned everything by heart, including every single part and bone of the horse — no mean feat in Italian — every disease, how to do grid references on a map, how to find your way in the middle of nowhere. No one else on the course seemed very bothered, including one girl who was spectacularly clueless.

As the last day approached, when we were due to go before a panel of examiners, I had serious trouble getting to sleep. When my turn came, the chief examiner exchanged a few pleasantries with me and stretched out his hand to shake mine. “Congratulations, you’ve passed,” he said. “Please call the next candidate.”

I made my exit in a confused state. They hadn’t even asked me to get out a compass! To be honest, I was decidedly miffed; especially when I found out all the others had passed too. Including the girl who didn’t know a fetlock from her elbow.