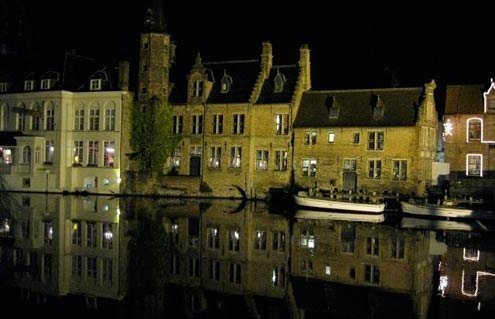 The canal at night. All photos by Ingrid Williams.
I

n the still waters of a willow-lined canal, quaint gabled row houses seemed to gaze peacefully at their own charming reflections. One gorgeous photo in the back of a crumpled airline magazine was all it took to convince my husband that we had to go to Bruges. Admittedly, I hadn’t heard of the place and had never had a particular desire to visit Belgium. But I was eager to escape the constant rain that slides over the Apennine Mountains and transforms our small slice of Italian paradise into a miserable, gray puddle every winter.

After an hour on the train from Brussels, we quickly realized that although we had never heard of Bruges, all of England certainly had. On the main street, graying pensioners loitered in clothing stores that brimmed with woolen hats and mittens, ruddy-cheeked children longingly pressed their noses against chocolate shop windows, and large families paused mid-sidewalk to share platefuls of fries topped, Flemish-style, with mayonnaise. The inevitable stag parties huddled in the town square, clutching cans of whatever was cheapest and goading each other into taking a spin on the outdoor ice skating rink. Whether young, old, drunk, or sober, the lilting English inflection was omnipresent. Thankfully, Bruges’ quiet back streets offered welcome refuge.

OTHER THAN its general loveliness, Bruges offers little in the way of traditional tourist attractions. But the loveliness does go a long way. In the Markt, the main town square, thousands of twinkling white lights outlined the gabled façades of the restaurants and cafés, each with a welcoming fireplace ablaze inside. In the center of the square, a temporary food market consisting of a couple dozen rugged wooden stalls encircled a makeshift skating rink. There, passers-by were tempted with the mouth-watering aromas of warm, irresistible treats like apple beignets, fresh sugarcoated donuts, crepes with warm chocolate, and waffles straight off the iron. It was a picture-perfect scene, like something pinched from an antique snow globe.

On the south end of the Markt, the landmark 13th century belfry loomed large beneath the darkening sky. Up 366 claustrophobically narrow steps, the square below took on doll-like proportions. In the distance, a handful of old windmills dotted a faraway canal and the pancake-flat land stretched all the way to the horizon. As the sunset cast a warm glow through the clouds, I could just barely make out a familiar sound. A faint chorus of “All I want for Christmas is yooooouuu, baby” recorded by the unmistakable Mariah Carey wafted up from below — before being completely drowned out by the enormous bell that began to clang at a deafening decibel directly behind us.

After the physical exertion and temporary hearing loss, we rewarded ourselves with waffles, which required a brief culinary lesson. What I had always called a Belgian waffle is actually known as a Brussels waffle in Belgium (though they are originally from Ghent, confusingly enough). These Brussels waffles are square, light, and traditionally served with powdered sugar. Tourists, however, give themselves away by piling their waffles high with ice cream, chocolate sauce, fruit, whipped cream, and all variety of calorie-rich toppings.

In Bruges, we discovered a species of waffle that was unquestionably superior to any waffle we had ever tasted before. They call it the Liège waffle, and it’s much denser and sweeter than the Brussels version. The trick is that the sugar is baked into the waffle, which gives it crispy, caramelized edges and a satisfyingly sweet and chewy inside. These waffles can also be topped with chocolate, caramel, strawberry, or any number of sauces, but this combination might send you into diabetic shock. And besides, left plain, they are unbelievably delicious. With two cups of steaming mulled wine and a couple of Liège waffles, we watched as a handful of children and their brave parents learned how to ice skate with varying levels of success.

WANDERING ALONG the canals beyond the main square, my husband and I first spoke the words that would become the mantra for our trip: “It’s so quaint … like a fairytale.” In the end, it became a running joke between us, but mostly because it was so ridiculously true. Moss-covered docks jutted into the still water of a canal bordered by centuries-old, stepped-gable houses and an occasional stone church thrown in for good measure. On small cobblestone squares, pint-sized brasseries set out blackboards announcing the daily special: mussels with fries. Every building was endearingly charming and every street was impeccably clean.

Bruges even provides its own soundtrack. Above the shop entrances on the main streets, Bose speakers pipe out a constant loop of cheery, easy listening hits from decades past. At night, thoughtfully positioned spotlights impart an ethereal glow on buildings and bridges. While other towns allow kitschy souvenir shops to deface their main thoroughfares, in Bruges, boutique chocolate shops littered the streets instead. Tourists who usually buy useless trinkets as souvenirs can instead load up on handsomely wrapped boxes of milk chocolate pralines or bags filled with lemongrass truffles and chocolate-dipped chilies.

WE PICKED up our chocolates at Galler, a chic, closet-sized shop that was markedly less mobbed than other shops near the Markt. Galler seemed to serve a mostly local, in-a-hurry clientele, though the friendly shopkeeper eagerly plied us with samples. In the end, we settled on a box of salted caramel chocolates and dark chocolate-covered gingerbread pralines, with a few of their addictive pistachio-filled, white-chocolate bars for the road.

After chocolate, the next logical thing to consume in Belgium is beer. A few blocks north of the Markt, we found ‘t Poatersgat, a candlelit beer pub hidden in an underground cellar (Vlamingstraat 82). Far enough away to discourage the casual tourist, we were pleased to find a refreshingly youthful, welcoming atmosphere in a town overrun with thirsty retirees. While other places (Cambrinus, in particular; Philipstockstraat, 19) might have thicker beer menus, ‘t Poatersgat still offered over a hundred Belgian brews.

As an interested and informed beer drinker, my husband rambled on about spontaneous fermentation processes and the difference between trappists, lambics and abbeys. As a less interested and certainly less informed beer drinker, all I wanted to drink was Duvel. It’s fantastically tasty and easy to drink, though the pleasure comes with a precipitously high alcohol content. But Duvel is a common beer, and common is not cool at hip beer joints. So instead I tried a Trappist Achel Blonde — monk-brewed beer is a source of pride in Belgium — which earned approving nods from the bartender and husband both. In the end, the Trappist tasted an awful lot like Duvel, but what do I know?

Although ‘t Poatersgat had a blissfully relaxing, cave-like atmosphere with overstuffed sofas and a foosball table in the back, after two beers we needed food. Back on the Markt, we stopped in front of a stall where a giant meter-wide cast-iron pan was filled with creamy-looking potatoes and speck. The sign said “Tartiflette Savoyarde” and the girl stirring the steaming potatoes gave us a knowing, conspiratorial smile. Whatever it was, it was going to be good.

We later figured out that it was generous quantities of cheese, cream, wine and butter that made the potatoes so mind-blowingly rich and creamy. But that night, standing out in the bitter cold, we savored the cheesy, starchy potatoes and spicy speck of this heavenly Belgian mystery dish (which, in the end, turned out to be French). I still dream about those potatoes.

A FEW BLOCKS away, hidden just half a block off the main shopping street, Zuidzandstraat, the Brugs Beertje is a legendary pub in beer circles worldwide. When we arrived, the tiny pub’s two rooms were nearly full, but we managed to snag a small table near the fireplace. While we paged through the menu, we overheard a group of elderly British women ordering wine from the bemused bartender. (There are nearly a hundred beers on offer, but just two wines — white and red.) Cozy and surprisingly quiet considering the crowd, we relaxed over Bink beers. No bemusement there, despite the silly name.

The next morning, we wandered around town taking pictures of the quintessential quaintness. Willow trees leaned over canals filled with dark green water. Horse-drawn carriages clopped along cobblestone streets past lace shops and pancake houses. The chocolate shops, cafés and tiny B&Bs created a visual hodgepodge of charming façades.

All weekend, I kept hoping that the snow globe scene would be completed with a dusting of white flakes. Instead, a light rain fell as we munched on a breakfast of crispy fries. But even under gray clouds, the lights still twinkled, the cheerful music still played, and the comforting aroma of waffles still filled the air. In any weather, Bruges is charming. Like a fairytale … with chocolate, waffles, and beer.

Ryanair flies to Brussels South Charleroi Airport, which is located 46 kilometers south of Brussels. From the airport, the bus to Brussels South train station departs once an hour, costs €13 each way and takes about one hour. From there, trains depart for Bruges. Alternatively, there are also direct busses to Bruges departing four times per day. The journey takes about two hours and costs €20 each way.