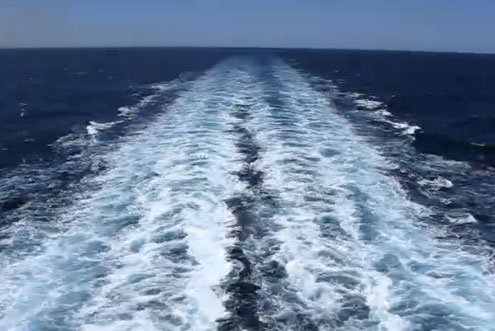 What was once done dozens of times a year was long ago reduced to a trickle.
L

eave behind a bungled love affair and what you get is rust: Big ships with older passengers and mostly Filipino crewmen crammed into an eight-year-old waterborne high-rise moving slowly over the North Atlantic toward Southampton.

This was once the norm, large and small steamers bridging old world and new, most of them British or European with hull societies tied to a class system lifted from imperial times.

No longer. The social playing field is now level, and the ships more beast-like, as if to trump the stylish but outdated counterparts that defined a separate-but-equal era of often beautifully snooty transport. The trans-Atlantic playing field is also been reduced to one player only, a queen-by-name British behemoth that makes the seven-day haul a dozen times a year, plowing ahead at 30 miles an hour as lean crisp jets, fast but disheveled, etch passing contrails over the watery dinosaur’s stubborn head.

Maybe it’s love gone wrong or a summer coming to an end, but what you most notice on the big ship with starship looks is rust, the ruthless freckles of passing time that all stain all liners, the insidious brown on railings, portholes, winches, sprockets, brown that not even the constant stroking of diligent Malay men can make any less eminent. Abetted by wind, rust is sea salt’s response to the confidence of metals, whose shiny optimism can be restored but not repaired. Rust is at heart of all horizons.

These days the big ship isn’t filled, or not entirely, not on Atlantic run, which is populated mostly by cheerful, buffet-craving retirees headed to destinations south and east of Southampton, usually the Mediterranean. The Atlantic is merely a segment. So much so that the big ship has made only 184 such crossings in a decade, a number that in the pre-jet age a liner might have reached in 18 months. Though the Titanic never made it to one, its four-stacked sister Olympic crept across this perpetually dissatisfied body of water more than 2,000 times over four decades.

Today’s poor economy plays a role — a week on the big ship is not inexpensive — as well as slow Internet, making simple tasks complex and removing the instant from every day life, at the whims of satellites and weather, and the humbling ocean. People of the pad can find seven unanswered days enervating, if not terrifying. Contact is abridged backwards to include only those around you, with no car to plot an escape. In that sense the North Atlantic is a vast and limiting place in an era that dislikes being reminded of anything it can’t do. Endless water for days on end is log cabin-like and elicits thoughts of explorers, who in long-ago trips witnessed the passing of four seasons twice over before landfall.

A reason to rejoice perhaps, since all humbling that is not disastrous does the soul a world of good.

But the rust won’t yield. It’s a state of things that puts slow ruin ahead of facelifts. What can be more easily put off on solid ground, where human remedies seem to have the upper hand, if briefly, is lost at sea.

On the big ship the retirees don’t seem to mind looking, or being, old, chipper adjuncts of the rust stains. They laugh and make jokes, saunter and run, and whisper, slightly drunk by night, talking about where they want to go in the time they have left. Their loudmouthed twilight is a trait the wizened Atlantic knows by heart and ignores by rote.

Sick, I came out here for a cure, or a diversion, an escapade that reeked of a past that knows me well. But that’s not what I found, or what the big ship’s August Atlantic had in mind: At least not this time. I made my first crossing a year shy of six. Now I’m a year shy of deeper water, the kind retirees at once cheer for and run from, hoping enough movement and volume will neuter the passage of time and paper over their indolence.

Some walk the long decks, others strut upright miles around and around the vessel’s length, promenade trekkers on a languid seesaw. Others lounge around and read, occasionally startled by the ship’s cannonade siren.

The mammal gym above, its digital workout machines glowing, sits atop the stowaways mammals, rats, that exercise below, as if to try to suggest the higher-perched humans can outrun or outlast their furry predecessors, which so far they haven’t.

Alone, evening after evening, I make my way to the Sun Deck, a rectangle of outdoor space I came to know on other ships decades ago, to watch the sunset. And evening after evening, night after night, I find empty space. Not another soul. Just me, a middle aged man, once a boy, looking out over the copious membranes of sea, parked in a bracketed nook of deck from which I watch an orange reptilian eye slip into its western pocket, my back parked against corner railing and in front of it a large upwardly curving patch of grey paint, and under it, inevitably and inexorably, rust.