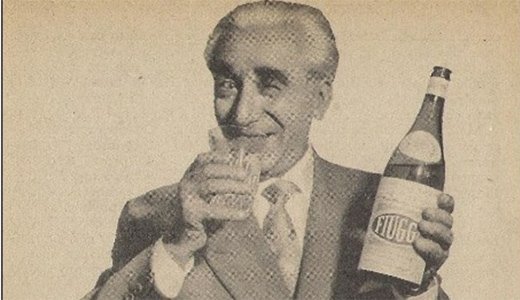 At many Rome restaurants of the 1960s, if you wanted still water , there was only one option.
R

ome slept soundly in July and August of the 1960s. So soundly you might have heard a snore, at least in my neighborhood, which took its cue from a sleepy zoo in which animals were too hot to parade themselves and people too hot to look at them, completing the local circle of summer ennui.

Today’s Rome has one, maybe two such dead weeks, both in August. But even its pajamas Rome stays half-awake to suit tourists and can never put a lid on the sacrosanct buzzing of its heathen cars. The ghost town era is gone.

Too bad, since I liked the doldrums, and they seemed to like me back. I took long solitary walks, studiously hunting lizards (my of catch-and-release program) and pausing long enough to stare at parked sport scars (finding an imported Triumph now and again). I also drank great quantities of Fiuggi mineral water, now as then parked in a glass bottle.

So much water, in fact, that my mother warned one night at a restaurant that I might turn into a fish. This seemed to me a novel idea. I couldn’t waifor the transformation. But the gills never came.

Instead I was invited by her friends to spend a weekend at new their seaside home in Sabaudia, just south of Rome. Now a small but established resort town, it was then mostly a congress of jagged sand dunes with a few apartment blocks to go with unattended villas. To get there, the family and I, six of us in all, were variously lumped into leaden crannies of a Fiat 1500.

Many places near the shore still had no running water. The sea seemed timid about approaching humans, as if deciding whether to taste them for the first time. The more the humans waded in, the more it seemed to recoil.

My mother’s friends were a loud and joyous bunch who immediately put me to work eating lunch, something I had always been bad at. I did not like food and food had no interest in me.

But it was lunch that officially began what is now widely known as the “Carbonation Crisis of 1965,” whose details I honor to keep alive the vital memory of boyhood fussiness.

Thirsty, I was poured an ample glass of water – which I immediately gagged on. It was carbonated water. I couldn’t drink carbonated beverages, whether coke or water. I’d assumed, as 11-year-olds do with total confidence, that they’d have ample bottles of flat Fiuggi to quench my increasingly Saharan thirst.

But they were bubble people. They had no such still water, and wouldn’t let me drink from the local fountain, fearing I might get sick.

These days, bottled water comes with bubbles, without them, in flavors or infused with lion sweat.

Paternal protocols immediately kicked in and the father of the household, who owned a restaurant, drove me (not entirely cheerfully) to the nearest hamlet. No luck: the one store sold no still water. They recommended we go to the local gas station, where according to legend one of the attendants was said to drink only still water (as if he belonged to a cult). We went to the station but the cult leader was off for the day.

Back we drove to the beach. The next advertised possibility was to let the carbonated water sit in the scalding sun until it flattened. “The bubbles will go,” I was told. But where precisely would the migrant bubbles travel to (assuming they could even get in), and what about the sullied taste of the water they left behind?

In fact, the disobedient bubbles went nowhere, disguising themselves as popped in water that now tasted to me like the seawater nearby. I couldn’t drink it.

A family summit ensued. My mother could not be called; the beach house had no phone. Casting me adrift was mulled over, allegedly to make me laugh. I didn’t. What if I became a fish?

Finally, as my thirst grew unbearable, a decision came down from the mother of the family, who had argued with her husband about what to do, an argument that had bored all the children except me, since I was the water-deprived fish in the lot.

I would be driven back to my own mother’s place in Rome by a do-it-all, chain-smoking uncle. He would deposit me, like damaged luggage, under my flat, and drive back to the beach.

So it was that one August day in another era a boy was driven back from the Mediterranean seaside to quench his thirst, for water of all things. My mother later apologized profusely on my behalf. I was a finicky child, she explained. She should have known better.

That night, she gave me the silent treatment. Did I care? Not at all. I now had Fiuggi bottles all around looked forward to a Sunday of lizard and sports car-hunting.

Westerners these days live among so many kinds of bottled water they don’t know to choose. Water comes with bubbles, without, in flavors or infused with lion sweat. All that’s missing, and I await it patiently, is water with fish included, so I might square that circle and begin to swim.