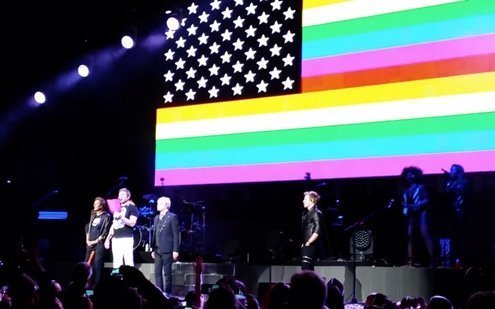 Duran Duran went ahead with a North Carolina show, but they made their point.
M

usic has always possessed considerable political power, rallying people and nations around common ideas and shared feelings. But the now-massive economic potency of the entertainment industry means that the music itself no longer needs to be about social awareness or even change. Instead, a band can send a powerful enough message just by canceling a show: “We won’t bring our business round here no more.”

Musicians can now balk when they feel the circumstances of an appearance aren’t right, with their disapproval expressed through the medium of economic (and cultural) boycott.

Take veteran stars Bruce Springsteen, Ringo Starr and the band Pearl Jam. All support LGBT rights. All were among a number of prominent musicians and groups to cancel North Carolina concert dates after the March passage of HB2, the so-called bathroom act, which in addition to making gender-based anti-discrimination policies all but impossible also specifically banned people from using public bathrooms that didn’t correspond with their biological sex. North Carolina officials insisted the bill was intended to maintain public privacy.

The ensuing uproar spread well beyond the musical world. Paypal shelved a plan to open an operations center in the city of Charlotte, negating 400 jobs. Deutsche Bank curtailed a planned expansion that would have added 250 state jobs.

Not all musicians took the boycott route. Some responded more traditionally, by performing while rallying fans to challenge the legislation. Duran Duran, for example, passed out petitions for their Charlotte audiences to sign. Others donated the proceeds from their concerts to organizations working to strike down the bill.

In entertainment terms, these fundamentally different approaches to protest —boycotts vs. in-the-flesh dissent — are beginning to favor denying money over supplying music.

If only the boycott method, however appropriate to life in a consumer society, didn’t come with a potentially damaging downside. Taking the boycott route risks dividing musicians from the audiences that need them most. Worse, it makes the boycotters themselves active participants in the further cultural isolation of places already intolerant of progress and change. While stay-away intentions may be noble, the act itself neglects the ultimate value of musical art — spreading lyrics and establishing a presence.

Mississippi makes a sad cased for the limits of the boycott approach. In April, less than a year after the U.S. Supreme Court required all states to recognize same-sex marriages, the state passed the Religious Liberty Accommodations Act, or HB1523. Catering to a traditional Christian population, the law pledged that state government would not punish those who refused to provide services — whether a job, a home, or marriage — to those engaged in non-traditional sexual practices, including participants in same-sex unions and those who’d undergone transgender surgery.

Critics denounced the bill as the most egregiously discriminatory state law ever directed against the LGBT community. Five states, including Minnesota and New York, actually passed travel bans restricting its government employees from non-essential visits to Mississippi, a ban already in place for North Carolina. Canadian rocker Bryan Adams canceled an April show in Biloxi, which would have been his first appearance there since 1987.

Yet Mississippi is so culturally isolated, particularly from the glare of mass media, that its exclusionary law received far less attention than North Carolina’s. In fact, few arena-filling musicians even tour Mississippi, something Adams’ all but acknowledged in a less-than-fiery declaration — “Hopefully Mississippi will right itself and I can come back and to perform to all of my many fans.”

Ironically, however, pulling out of concerts in states such as North Carolina and Mississippi only fuels established bigotry. The absence of dissent just means more of the same, with isolation breeding isolationism. Not playing in Mississippi — while it may feel right to some performers — simply deprives the state of the unifying and healing energy of music, energy it desperately needs.

Music has always worked best through direct impact, bringing people together and linking them to a broader sense of belonging. The protest songs of the 1960s and 1970s won twice over: they brought masses of diverse people together around central ideas, whether racial equality or an end to the Vietnam War, while simultaneously making their way into the American musical canon. Protest songs drew their strength not so much from cash-rich sales and marketing, but from how lyrics and melodies pulled on hundreds of thousands if not millions of heartstrings.

Artists are right to worry that a hateful government might use their presence as an economic asset – a worry that kept many musicians from apartheid South Africa for years. At the same time, they also need to consider the value of rallying fans and potentially changing minds through their presence, a hard-to-quantify factor that economic boycotts neglect.

Seeing protest in financial terms alone is a culturally complacent choice. Music has long been the voice that pierces the darkness and embraces the most oppressed. It has existed to provoke. Economic protest shuts the classroom doors on just the kind of public “conversation” that might make end up making the greatest difference in America’s most medieval states.