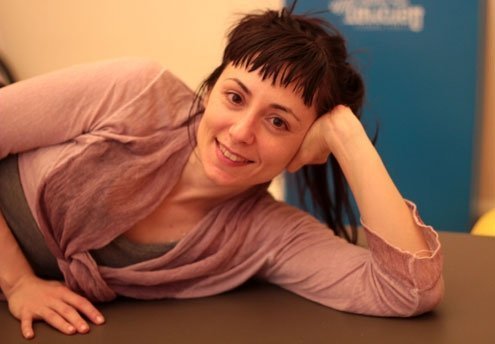 For Flavia Bruni, passion and discipline go together.
I

t’s a bitterly cold New York City winter day and my friend Flavia Bruni is wrapped up in a puffy jacket and a sweater. But that’s just the wrapping. When she sheds her layers a cute floral print dress stands out and cascades just so over her strong and elegant ballerina legs.

When Flavia talks, her hands take an Italian turn. They float in front of her to make a point or to emphasize something she’s particularly passionate about. And Flavia is a woman of many passions.

A dancer, she moved to the city a decade ago to work on her technique. Her dance interest began at age three when her parents first took her to a recital in her native Bologna. “It was so beautiful I almost fainted,” she tells me shyly. “I actually came down with a fever, that’s how much I was impressed by it.”

Since the time I met her in college she’s always carried around a little notebook with to-do lists and plans. “Passion and discipline go together,” she says. That sense of discipline led her to study ballet and contemporary dance in Italy, ultimately her earning a scholarship to attend the dance department at the University of California, Santa Barbara. Once in New York, she performed the work of choreographers Katiti King, Max Stone, Diane McCharty, Carla Vannuchi, Gessica Paperini and Marjolayne Augerv.

But one day something she’d been developing in her notepad tugged her in a slightly different direction. She’d formulated a Pilates method and decided to apply it commercially in a city where health and fitness play a central role. Wildly popular in the United States, Pilates — created by German gymnast Joseph Pilates — is exercise based on controlled physical movement both on the mat and on machinery Pilates himself invented.

In 2011, Flavia opened the “Be Beautiful” Pilates studio in Soho. Six months later, in 2012, New York Magazine voted her tops in the city its annual “Best of New York” issue. She now has a steady clientele in a highly competitive city. She gives both group and private lessons.

Too often, she says, women ignore their physical potential, which is limited either by preconceptions or daily routines. Her goal, and what she most enjoys, she tells me, is to help women “unlock the natural strength, beauty and sense of well-being created when bodies move in the way that nature intended.”

This isn’t fitness double-talk. Flavia is focused. She sees female elegance and grace as deriving from “a body that works well, that’s in shape, but a shape that’s natural, and not forced and created by pointless workouts at the gym.”

She’s has always seemed to possess a sense of natural balance. She’s petite and wears delicately perched reading glasses. She shows me a series of precise exercises she’s developed — “Tools for Grace,” she calls them. They involve Pilates equipment, lavender scented tissues, straps and balls, while opera music plays in the background.

Her cozy Soho studio is easily transformed into a confessional of sorts, where clients reveal the stress and pleasure in their lives through the way their bodies move, or fail to.

“New York,” she says, “is conducive to lots of hard work and lots of going out at night with no respect for the body. I help women who are maybe borderline workaholics to find time for their well-being.”

Her clients include models, brides-to-be, and all-American beauties whose focus on developing athletic bodies saw them set aside their femininity. Flavia tries to focus on the importance of little things — even the little finger. “It’s a little finger, yes, but if we hold things with it, instead of using the upper part of the hand, it helps us use our back muscles in a more efficient and graceful way.”

I decide to become a pupil. I feel like I’m in good shape. I run. I practice yoga. I’m Italian, which makes me a know-it-all regarding femininity and grace.

But my friend Flavia cuts me no slack. There’s no chitchat. She’s sweet but determined. My workout is intense, its motions carefully designed to help me become aware of aspects of my body I’d never considered. Tightness, tension and fears are revealed and discussed.

At one point she sticks a lavender tissue under my nose. I’m suddenly transported. Lavender was my beloved grandmother’s scent of choice. I want to take it all in, to embrace it. I relax my shoulders. Class is over.

“How do you feel?” Flavia asks. I feel lighter, but also taller and lovelier. I’m suddenly hesitant to drape my giant handbag over my shoulder. I like my posture as it is and I tell her so.

This might be perfect time for friend Flavia to weigh in, since she’s always advised me to put aside the bag for a backpack, to better distribute the weight. But there’s not a word of second-guessing.