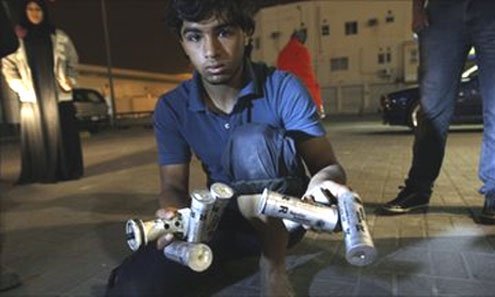 Nowhere to go in Bahrain.
T

he flash-mob revolts sweeping the Middle East are not what they seem. They are not the product of years of intellectual dissent or a pent-up rage for democratic reform. They are the resentful culmination years of despair among a generation of disenfranchised youth recently emboldened by social networking and made heady through copycat rage. People invited into the online glow want to belong to the affluence they see and are willing to tackle the old-school bouncers that once shooed them away as trifling pretenders.

The rousing, regrettably, doesn’t always equal the rational. Consider Bahrain. Among the requests by protesting mobs was a new constitution written by the people. But people don’t write constitutions. They instead promote their intelligentsia to do it for them. Mobs make insurrections; leaders with plans make revolutions.

The joist missing from the structure of Middle Eastern revolt is the presence of leaders-in-waiting within or parallel to the dissenting mobs themselves. Though the befriending linkage of the Internet has helped identified bogeymen and galvanized people power, even the more successful movements, in Tunisia and Egypt, have fumbled for a compass after purging their pariahs.

That’s because while social networking can cue outbursts and potentially melt tyrants, it cannot supply the bearings of leadership. Desire for reform stalls unless nitty-gritty reformers are a component of revolt. Tangible leaders represent any movement’s second stage, witness the Communist and National Socialist consolidation of the 1920s and Turkey’s Ataturk-led secular revolt.

It’s indisputable that Middle Eastern citizens, whether in North Africa, the Gulf States or Iran, crave better living conditions and seek financial stability, which the West ties to political representation and democratic entitlement. Such desire trumps even the deferential dedication to religion, at least in the short term.

But keenness in a vacuum exhausts itself. Iran worked to dismember opposition movements above all to block the emergence of a charismatic figure. Even one in exile, it knows, can change the course of events (Ayatollah Ruhollah Khomeini directed the 1978 Islamic mutiny from Paris).

Ironically, the cacophony of voices that networking invites to proliferate may work against the development of leaders, who usually build loyalty from the ground up, with loyalists preferring one ordering voice to the confusion of many. Democracy itself can also express such loyalty: Franklin Roosevelt won four consecutive American terms as president. Fear of an indefinite plebiscite produced an amendment to the U.S. Constitution that created the two-term-only presidency.

The collapse of communism in Russia had a vivid spokesman, Boris Yeltsin, around which dissent coalesced. Post-Apartheid South Africa embraced African National Congress dissident Nelson Mandela. Time and again, uprisings turned substantive when led by men and women who understood symbolism and were determined to replace the totems of the ousted with those of their own.

China will be attentively watching Middle Eastern events for two reasons. Chaos disrupts poor economies, and those of Tunisia and Egypt have been humbled. China can forge deeper economic claims far from home by stanching some of that damage. Beijing’s search and rescue mission, implemented through investment, has already worked in South America and east and west Africa.

China will also eventually face civil unrest, whether focused on economic inequity or civil rights, and is busy studying how it evolves elsewhere. Internet limitations and the discrediting of the country’s incipient dissent movement (including Nobel Peace prize winner Liu Xiaobo) are part of Beijing’s pre-emptive measures. Another is emphasizing xenophobia, so that eventual groundswells can be blamed on outside agents. More shrewdly, China’s has encouraged the growth of a small but affluent middle class, hoping its new “haves” will eventually come in handy against its countless have-nots.

So far, the Middle East virus has shown no signs of being Ebola. Two aging autocrats have lost their jobs. Others may follow. Democracy is another matter entirely. Unstable Tunisia doesn’t yet have the national infrastructure or the educational protocols to support town hall egalitarianism. Same with Egypt, whose military upper echelons doubles for its management class, at least for now. Once the coital spasms of street demonstration wear off, illusions of social equality revert to ongoing marital carping, sincere but tame.

Oil juggernaut Saudi Arabia, the key player in the Middle East string, has so far remained aloof from the tinderbox. Its royal family has more to lose than all other regional nations combined. Neither Islamic critics (Osama bin-Laden is Saudi) nor regional progressives have made much progress in a locked-down kingdom whose high per capita income limits hardcore dissatisfaction. Massive street protests in Riyadh, which lords over 90 percent of the world’s oil, would put democratic capitals in a sudden quandary.

Another overall complication of regional uprising is ethnicity and religion. Most Arab states, beneath the thin veneer of youth rage, are split along Shiite-Sunni religious lines, which the U.S. discovered with absurd tardiness in Iraq. Transferring loathing of autocrats into for-the-people governance is a nettlesome project for indigenous reformers. Only strict nationalists have had much Eurasian luck: Tito and Nasser, say. But they are figures from another world and time.

Libya’s Muammar Qaddafi is a hybrid unto himself, a gifted opportunist who for five decades has positioned himself between revolutionary cult figure and garden-variety dictator, pledging allegiance to the highest bidder. He’s the most likely to either squash revolt or to revise national statutes in an effort to keep his lucrative grip on power. He has not yet been fully tested.

Who or what might test him in an epoch in which specific names and friends matter, generating the celebrity vital to enduring media attention, is a mystery, and a crippling one. All along the watchtower, despite the mobs, twittering princes still keep both perch and view.