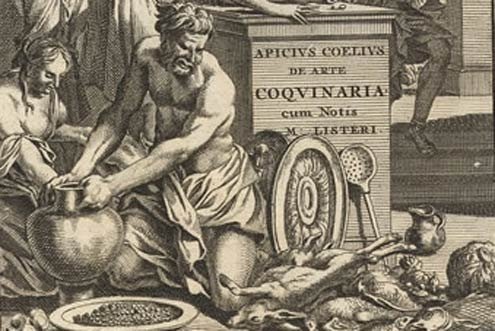 If you liked roast parrots and milk-broiled snail, Apicius was your man.
B

efore the Romans consolidated their far-reaching empire, eating was truly humble pie. Most important was basic sustenance, with porridges and cereals as staples. While that may sound healthy these days, most ancient fare was meager and repetitive. Only the affluent had access to meat, eggs and cheese.

But as the empire expanded, so did the range of foodstuffs. Conquering Roman legions brought back both the spoils of war and interpretations of cooking traditions they uncovered in distant and sometimes exotic places. At its first century AD zenith, the Roman Empire extended north to Scotland, south to Sudan and east into Iraq and the frontiers of India, a massive amount of territory that covered a variety of culinary traditions. High-end Rome was suddenly deluged with rare spices, fruits and animals not indigenous to the Italian peninsula. Rome’s foreign legions also imported new conservation techniques.

Most Roman culinary tricks came from the Greeks, whose own Mediterranean empire once rivaled that of the Romans and extended to Sicily. The Greeks combined the pleasure of eating — sumptuous banquets — with art, including performances during meals, hoping to nourish both body and spirit.

Seeing this, Roman patricians decided to make eating “cool.” They invited dinner guests by the dozens and surprised them with exotic and costly foods. They even hired Greek chefs to organize evenings, tables and menus.

But their emphasis on opulence and the presentation of rare delicacies often ignored how flavors worked together. Ham grabbed from Gaul would find itself mixed in with Indian ginger.

First century Roman chef and epicure Marcus Gavius Apicius brought both wild taste and a sense of arrangement to the sumptuousness. Working under the reign of luxury-loving Tiberius, Apicius was a nouvelle chef before novelle existed. A typical meal at Marcus’s place might include roast parrots, milk-broiled snail and stuffed sow uterus. A glutton and a genius, he couldn’t get enough of elaborate concoctions. He produced an early version of foie gras (from pork liver) and developed a number ways of cooking meat. The historian Pliny the Elder records him as recommending flamingo tongue and camel heel. Seneca praised him for inventing “the science of the cook shop.”

Though an early Roman cookbook bears his name, no one really knows Apicius’ original recipes. Apicius’s cookbook was compiled only several centuries after his death and provided only anecdotal evidence of what he made and how. Still, it provides the backbone of what’s known about eating habits in upscale ancient Rome.

Today’s Italian cuisine owes a debt to the period’s voracious search for new and rich flavors as a means to flaunt wealth and status. In that sense, Rome hasn’t changed much — at least not when it comes to showing off. Old-school Rome trattorias that offer traditional cuisine are now flanked by spots that serve basic sushi and sashimi, the newest thing in “very cool.” Too bad Asia’s voracious sushi-love is pushing the Mediterranean’s dwindling red tuna population to the brink of extinction.

Rome has always been a welcoming city. It was “caput mundi,” the center of the world, for the ancients. The growth of the Roman Catholic Church gradually attracted religious pilgrims. Seeking new customers, Rome restaurants began adding a piatto della casa, or house dish with “secret” ingredients, to help make local cooking more mysterious and attractive.

I love springtime Rome. Twilight bathes Campo de’ Fiori, Piazza Navona and the Pantheon in warm yellow light and people line up for a glass of wine at wineries, or enotecas, most of which have been around in one form or another for centuries. Milder weather also makes me dream of fish and seasonable vegetables, including artichokes, a favorite of mine.

With Roman hospitality in mind, here’s one of my favorite springtime dinner meals.

Start by toasting the slices of bread (in the oven or toaster). In a salad bowl, cut each tomato into fours and mix with a slightly crushed garlic clove. Add olive oil, crushed basil leaves (with your hands, not the knife, to avoid oxidation) and add salt and pepper. Let the mixture sit for 10 minutes. While the bread is still warm, spoon the seasoned tomatoes on to the bread. Serve as an appetizer.

Take the 6 artichokes and cut the stems. They should be no longer than 10 centimeters. Discard the toughest leaves. Trim each artichoke by a couple of centimeters. Place the cleaned artichoke in lemon water (the acid in the lemon neutralizes taste-altering oxidation).

Crush the artichoke heads to open them and place the chopped herbs in the center of each head.

Put the artichokes heads-down and side-by-side in a pot (do not pile them up).

Apply salt and pepper and add ample olive oil (the oil should rise to 1/2 or 1 cm below the heads of artichokes). Add a drop of water (equivalent 1/2 cup).

Bake at low heat (slowly) until the artichokes become tender (test them with a fork). You can serve them cold as an appetizer, or warm as a main course.

Clean the prawns by removing the shells but not the heads.

Clean the squid by removing the internal organs and inner shell and cutting the rest into small pieces.

Clean the mussels with a brush, then put them into a large frying pan with a lid and cook them until they open.

Remove the cooked part from the shells and put these mussels in a bowl. Add the water that’s been released when the mussels were cooked (filtering the water through a strainer).

Bring the pasta water to a boil and add the tomatoes. Remove them after exactly a minute. Let the tomatoes cool, peel them, and cut them into quarters.

Sauté the cloves of garlic and diced red pepper in a large frying pan, adding 3 or 4 tablespoons of oil. Before the garlic turns golden, add about two teaspoons of anchovy paste or a tablespoon of fish sauce. (Be careful, as the hot oil may splatter).

Add the shrimp and the calamari to the mix, sauté for 3 minutes and then douse in dry white wine or saké (I prefer saké; it has less effect on the taste). Wait another 3 minutes, remove the shrimp and put them aside. Add the tomatoes, cut into pieces and sauté again. When they start to sauté, add the mussels’ water. Let the sauce thicken.

Cook the pasta for 4 minutes less than the recommended cooking time, remove it, and put it in the sauce along with shrimp and mussels. After they’re mixed, finish cooking the pasta. Sprinkle abundantly with parsley and serve hot.