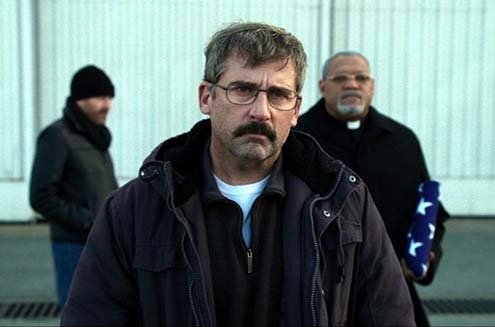 Steve Carell is Doc, or Larry, in "Last Flag Flying," which also features Bryan Cranston and Laurence Fishburne.
I

n an age of hyper-patriotism, one that glorifies the military and celebrates the heroic, “Last Flag Flying” is as close as we’re going to get to an anti-war film. A buddy film with coffin, it’s like “Mash” (1972): both funny and deadly serious. In this case the movie, based on a novel of the same name by Darryl Ponicsan (“The Last Detail,” “Cinderella Liberty”), is shaped by the war in Vietnam, where its central characters fought, survived, and were profoundly changed by events that happened 30 years in the past.

The action takes place over a few days in December 2003, just as Saddam Hussein is found hiding in his spider hole. Doc/Larry (Steve Carell), a Navy veteran whose wife died of breast cancer in January, learns that his only son, Larry Jr., a Marine, has been killed in Iraq. Needy, traumatized, and introverted, Doc tracks down two Vietnam War buddies, veterans of the Marine Corps, and asks for their help in burying Larry, Jr., and, as it happens, in bringing closure to an incident that took place in 1973. Sal (Bryan Cranston) is a salty, brazen, witty, charismatic, alcoholic bar owner in Norfolk, Virginia. Mueller (Laurence Fishburne), at one time a foul-mouthed drug user and womanizer, is now a pious and pompous rural preacher. The trio wends its way to claim and accompany Larry, Jr.’s body, by heading first to Arlington National Cemetery, then — via New York City and Boston — to Doc’s hometown of Portsmouth, New Hampshire.

“Last Flag Flying” is told through three stories and two voices, with Doc as observer and listener (in a sense, the viewer). Told without flashbacks, two of the stories are of Vietnam vintage, and both involve all three protagonists. One is about how and why Doc, a Navy man, served two years in a military prison. What we learn helps explain why Sal wallows in alcohol and Mueller, hiding behind his clerical collar, in dysfunctional piety.

The other Vietnam story is about the role of Doc, Sal and Mueller in the needlessly painful death of another soldier, Jimmy. Again, there’s guilt and shame in abundance, and a poignant but wrong-headed effort to locate Jimmy’s mother and engage in group confession.

The third story — of how Larry, Jr. was killed — emerges in the 2003 present, through Sal. His role in the film is to challenge authority — the Marine Corps, the military establishment, the generals and politicians who gave us Vietnam and Iraq, President George W. Bush, as well as the faith spouted by Mueller — and insist on the “truth,” while also confronting the limits of truth-telling. Should Doc know that his son’s death was less than heroic? Should Doc open the coffin and look at Larry, Jr.’s blown-away face? Should Jimmy’s aged mother (Cicely Tyson) be told the circumstances of his agonizing death 30 years earlier?

Sal’s is one voice or perspective. The other is Mueller’s. His is ostensibly the voice of faith, but it would be more accurate to label it repression. He fears engagement and is uncomfortable with intimacy. He resists joining the other two in accompanying Larry Jr.’s coffin (his wife insists), and he balks at Sal’s suggestion that the three purchase cell phones so they can call each other (one of several deliciously comic scenes that advance the narrative rather than interrupting it).

There’s plenty to like here: Ponicsan’s and director Richard Linklater’s smart, talky screenplay, full of ideas, ethical questions, and humor; characters that grow and develop while dealing with their complex pasts; superb performances by Carell, Cranston and Fishburne, and by J. Quinton Johnson, as the young black Marine, Washington, who accompanies them and ties the story and the themes to the present.

If “Last Flag Flying” has a flaw, it’s that it wants to be an anti-war film but can’t help buying into today’s infatuation with the military. The film’s ambivalent posture is brought home in its final scenes. These — Larry Jr.’s burial and wake — vitiate the anti-war critique, best articulated by Sal, by finding transcendent value in individual service and in the bonding that takes place among the film’s main characters. Sal and Mueller show up for the burial in dress blues. They fold the flag with honorific pace and precision, and Doc accepts it (though here, admittedly, Sal has a cynical word or two). Then, at the wake, Doc silently reads an all-too-perfect letter from his son, understandable in its way, but also eloquently expressive of the very ideas —service to country, pride in the uniform, religion — that the film until the last scenes had labored to discredit or, at least, set at issue.