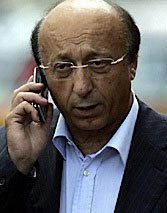 or some reason, I missed the beginning of the football match-fixing scandal involving Torino team Juventus — Moggi-gate — now consuming Italy. This is a serious matter, because the story looks like it’s ready to join Ustica, P2, Piazza Fontana, the murder at Circeo, and the Mostro di Firenze among a slew of Italian scandalous affairs whose beginnings I missed. If what happened with those tales is any indication, I have two decades of frustration and scores of unread newspaper pages ahead of me.

Italian scandals grow headlong, throwing out new cast members and plot twists at cancerous speed. The opaque and often self-aggrandizing style of newspaper writing makes following a story hard going. Allusions and insinuations snuggle with fact. Moreover, Italian journalists apparently neither know or care about “nut grafs,” the helpful paragraph at the beginning of American news stories that summarizes events, putting the background and salient facts in a nutshell.

A nut graf might help those poor folk who haven’t been reading faithfully since 1948 — or at least 1968. While struggling to master Moggi-gate, I realized that my desire to dominate the facts was misplaced. The real importance of the scandal, like Clearstream in France or Enron in America, was not the facts themselves but he meta-story behind them; the story’s wider cultural function.

Almost every time I attend a dinner party in Italy, someone challenges me with the shocking idea that America too (gasp!) is scandal-ridden. Of course it has its share, but the American meta-story is quite unlike the Italian one. Enron, for example, is quickly transformed into a poster child for the can-do American spirit. We have found the rot and our common will and beloved institutions can clear it up. Good will triumph and there will be closure. American corruption and scandals are seen as operable tumors and our institutions as skilled surgeons. Our tumors are well-defined, do not metastasize wildly and can be extirpated. Regardless of the pain and scars, we are confident that, though temporarily weakened, the patient may actually emerge stronger.

In Italy, corruption scandals are seen as inoperable cancers. The mutant material is so deeply embedded in the tissue of society that no clear outlines can guide the surgeon’s knife. With the extent of the disease unknown, an operation is a risky endeavour that may lead to death. Commentators take grim satisfaction in demonstrating that the cancerous tissue of raccommandazioni and interessi has infected even the beautiful game, the last remaining institution that Italians could believe in. The Italian press seems to thrive on vast conspiracies — right wing, left wing, any wing. A kind of self-directed schadenfreude invariably erupts along with Italian corruption scandals.

Worried about my coming two decades of helpless ignorance about Moggi-gate, I turned to Panorama, hoping that a weekly might offer a helpful chart or summary of the events and connections so far. It did not.

Instead, another article on the Montesi case in the same issue proved my own theory about Italy’s meta-story. In 1953, Wilma Montesi, aged 21 drowned on a beach near Rome. The first big post-war scandal, it set a still-repeating pattern. Drugs, political corruption and shady business deals filled out the story. Panorama quotes a 1954 article on the case written by Pietro Ingrao, then editor of Communist party newspaper l’Unità. Ingrao used the term — still applied today — “questione morale” to describe the Italian public’s conviction that public life harbors a “privileged group that, unpunished, eludes common law.”

Further confirmation of my theory appeared in Corriere della Sera, the following day. An article about (drug-addled) Lapo Elkann’s return home, suggested that his and Juventus’ troubles might not be unconnected. Italians’ interest in such overlapping is not unique. It’s just that they find them in their local equivalents of The New York Times or the Washington Post, rather than in publications that American readers might read in a supermarket line.

My difficulties with Italian newspapers are not unique. Boldly facing off the precipitous worldwide decline of the traditional print media, a group of veteran journalists from Italy’s top mastheads, launched the Italian weekly News about a year ago. Its unenviable mission is to reach the disaffected and elusive under-30 reader, who is turned off by the same old stories and wants a newer “grammar” of news delivery (and shorter sentences). News’ founders borrowed €20 million from investors for this challenging initiative.

Maybe they just should have stuck to their old jobs and learned to write nut grafs.