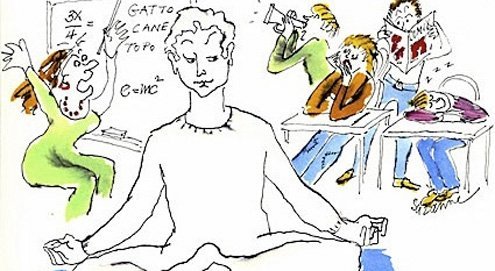 As time went on, we began to see that not only was Matthew coping, he was thriving.
&

#8220;What’s ADD” — Cos’è ‘ADD?’” — my son’s teacher asked when I tried to explain to her what to anticipate when our son first became a member of an Italian classroom. “Don’t worry signora,” she said. “This is something the Americans invented. We don’t have it here. We have the children who work hard and do well and we have the children who don’t work hard and don’t do well. Once in a while, we also have the child senza intelligence, but that doesn’t happen often.”

When we lived in New York, our son Matthew had some significant problems with learning. He was incredibly bright, but he wasn’t achieving in the traditional sense of the word. He wasn’t finishing his work. He was easily distracted. He wasn’t taking instruction. After extensive academic testing in the United States, Matthew was diagnosed with Attention Deficit Disorder, or ADD.

When we moved to Italy and school started in Varese, Matthew complained that his class was unusually chaotic. He told us that the children all spoke at the same time and that the teacher was constantly yelling to gain control of the classroom. Knowing Matthew’s aversion to noise and confusion, we thought he might have been exaggerating a bit, or at least that his difficulties were associated with his initial difficulty in being immersed in a learning environment where he did not speak the language.

Then, one day early in October, I had the opportunity to come to school to participate in a craft event, and I saw that he was not exaggerating at all. The teacher not only yelled for about 70 percent of the time I was there, she cursed as well, and the students continued their conduct oblivious to her tirade and even laughed at her while she ranted about how she had a “f—ing toothache” and no one “gave a f—k.”

As time passed, it became evident that we would be powerless to change the situation. We had all but alienated ourselves from the teachers and administration by bringing the issue to their attention countless times. We were confused and very concerned about what to do. Just as we began to consider whether we needed to home-school Matthew on a full-time basis, things seemed to get better. I thought that the classroom environment had changed, but as it turns out, it hadn’t.

Matthew had somehow figured out a way to adapt to his environment. Either he was shielding out the noise and confusion — for the most part, at least — or he had devised a coping mechanism to deal with it. His language acquisition increased gradually and he began developing friendships. He understood his studies, did homework, and seemed in generally good spirits.

As time went on, we began to see that not only was he coping, he was thriving. He could recite complicated historical concepts in Italian, he was absorbing advanced grammar, some of which his Italian classmates tripped on. He was doing math under a metric system he had been exposed to only briefly. His teachers were thrilled with his concentration and progress. Finally, in April of last year, he and his brother, Alex, won the academic premio honoring them as the best student in their respective classes. By any measure, Matthew was achieving in the Italian classroom in a way that he had not been able to in the States.

What is ADD, anyway, and how did Matthew’s symptoms disappear in an environment that, by all logical reasoning, should have heightened them? Why was he focusing and thriving in a way that he did not in the more functional American classroom? How could he adapt to the modalities of Italian teaching?

We’re no experts, but thanks to Italy we think we now better understand the condition as it relates to our son. ADD appears to be an aggregate of symptoms lumped under one diagnostic label. For Matthew, a big part of his ADD likely involved his psychological state — how comfortable he felt in his own body, his level of anxiety, how well he slept. The more challenged he is, the more advanced his ability to focus. The Italian classroom may have challenged Matthew to such an extent, nearly to the saturation point — learning a new language, trying to understand his surroundings in verbal and non-verbal terms, adapting to a new culture — that he didn’t have time for ADD.

Of course, I’m sure that he could have also just shut down completely, but the reality is that he didn’t.

The success he had in understanding the language and integrating into the classroom and society in general was self-fulfilling. Each day he survived, he had more evidence of personal worth. The self-esteem grew and evolved into one success, then another, day after day.

What about his change in diet from America to Italy? Could that have had an impact? In contrast to the States, most of our consumption here is roughly “organic.” Almost every food we purchase here in Italy is available in the normal grocery store without preservatives or additives. The fruits and vegetables we eat are without pesticides, because the Italians don’t believe in them. Our meat is without hormones or antibiotics because it’s against the law to use them. Is this change in diet related to Matthew’s turn-around, or is it merely a coincidence?

I don’t know what happened to the ADD symptoms. Are they gone? Did they just go underground? Will they return if we move back? We can put our guesses out there.

I do know that if Matthew’s ADD rears its head again medication is not the answer. The answer should be found instead in support systems, environment, and adequate challenges. I’m not criticizing those who decide to medicate their children, and don’t know if I’ll have to take back these words when and if we return, should I again have a desperately unhappy child who can’t focus and whose self-esteem suffers. But based on what I have seen, the Italian experience has, at a minimum, helped me to see my son’s potential without this cluster of symptoms. I hope he will keep the positive momentum going in whatever educational environment he finds himself.

About the Author: Denise Hummel

Denise Hummel is a graduate of Barnard College, Columbia University and the Washington College of Law. After practicing law for many years, Denise pursued a career in journalism. She lived in Varese from 2005 through 2007, freelancing for a variety of international publications. She is now the San Diego-based executive editor of justtheplanet.com, an online magazine for international travelers.