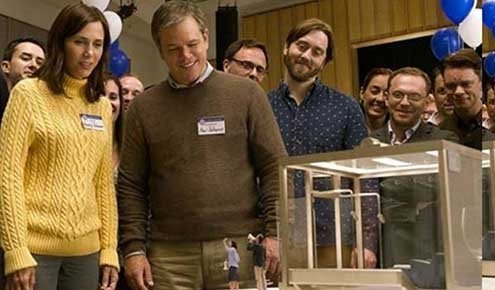 Greetings, little people! Matt Damon and Kristin Wiig look have a look at the lives of the downsized.
P

aunchy, nerdy Matt Damon —playing against his Jason Bourne screen persona– is Paul Safranek, an occupational therapist in an Omaha Steaks factory. He takes up an offer to shrink to a height of five inches to join a colony of “little people” who will use a fraction of the world’s resources and live in much grander style than their normal-size finances would allow.

“Downsizing” is the latest combination of comedy and earnestness from a master of the genre, Omaha native Alexander Payne (“Election,” “Sideways”). But its downsizing trope is only the first half of the movie. In this first half, Payne amuses his audience with a solution to the world’s population and resource problems (the eco-utility of living small); the lure of a lavish lifestyle for the struggling middle class; and the creepiness of having one’s body shrunk in a dehumanizing (all hair is shaved off) group procedure.

Once inside “The Truman Show”-like bubble of the “Leisureland” colony (initially it appears no one needs to work), Payne basically drops the little people concept. Indeed, Leisureland is more like, than not like, the outside world. It’s peopled with jerks such as Serbian Dusan Mirkovic (always engaging Quentin Tarantino regular Christoph Waltz), Mother Teresa types such as the Vietnamese dissident Ngoc Lan Tran (vibrantly comic Hong Chau), and a tenement underclass. The colony fails to turn things around for Paul, a would-be doctor described by Dusan as “just a little bit pathetic.” Despite his new surroundings, Paul remains unmoored, buffeted as much in the little world by who he wants to be as he was in the big world. After the film, one moviegoer said, “I forgot they were little people.”

The first half of the film has many compelling moments: the returning alumnus leaning against an Ak-Mak cracker box while extolling the virtues of his Leisureland life to his normal-sized classmates; little person Laura Dern showing off the diamonds and gold and silver she bought for about $100; the removal of teeth containing silver and gold — that won’t shrink —in the downsizing process; five-inch Paul toting a big-people rose, using both hands.

The focus of the film, however, is not this conceit, but rather Paul, the everyman, in search of meaning and grounding. He has no core. He’s easily swayed by the last person he encounters, be it the Norwegian scientist who came up with the shrinkage solution or the smooth-talking Oprah-like Leisureland saleswoman. In keeping with his inability to find an identity, Paul is awestruck by fame, by science and technology, by Tran’s passion for social justice, by the voice of the crowd, even by “Little Ronni,” the first baby in the first little people colony, now a puerile twenty-something bearing the marks of herpes from his celebrity sex life.

Safranek, so lacking a sense of self that he gives up trying to get people to pronounce his name correctly, seems incapable of evaluating his decisions. He plunges into the shrinkage concept without having a material discussion with his wife, a bland Kristen Wiig. He can’t assess Dusan’s corruption any more than he can Tran’s beneficence. He’s a naive observer, even to the final scene, when he continues to do someone else’s bidding, to follow someone else’s beliefs, rather than create and embody his own.

It’s not unusual for films to combine serious human dilemmas with the entertainment value of a shrinkage notion, a staple over the years (“Honey, I Shrunk the Kids,” “The Incredible Shrinking Man”). The problem with Payne’s latest work is that the plot is more a bait-and-switch than a consistent drama set in a novel concept — perhaps the source of its tepid audience reception. Unlike “Toy Story” or” Inside Out,” “Downsizing” fails to merge the drama and the conceit.

For those who enjoy an innovative approach to an age-old concept (think “Gulliver’s Travels” and “Alice in Wonderland”), who appreciate solid acting by the principal characters, and who take pleasure in the switch from cleverness to human concerns, this is a watchable and entertaining film.