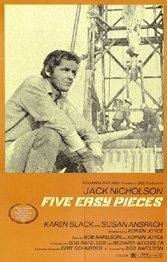 Jack Nicholson’s diner scene is legendary (stripping down sandwich components, surly waitress baring witness). But that’s not what Bob Rafelson’s movie tick. Instead, it’s classic 1960s restlessness. Robert Dupea (Nicholson), once a promising pianist, has said goodbye to all that and settled with white-trash (Karen Black, brilliant as waitress Rayette) in everyman oil fields. He drinks and cusses.

When he hears his father is dying, decides to drive to the family home in affluent Puget Sound, Rayette (against his wishes) in tow. But what works in the oil jungle and on a road trip doesn’t mix with Dupea’s pre-life, and the problems begin. Dupea wants to go home again, to place Tom Wolfe insists exists only in the mind. Rafelson is more ambiguous. What’s not ambiguous is how the names of the fictional leads tilt the film: Robert Eroica Dupea and Rayette Dipesto.