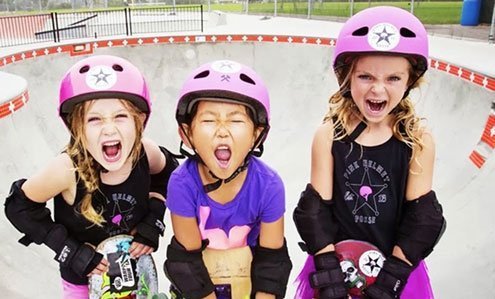 Meet the Pink Helmet Posse, ready to take on the boys.
W

hen I first saw the video feature on the homepage of the New York Times website I assumed it was important because of its placement. After all, it shared the page with big-ticket headlines that included “Rifts Among Shiites Further Threaten the Future of Iraq” and “Boko Haram Suspected of New Kidnappings in Nigeria.” Though the title of the report — “Gnarly in Pink” — made me a little dubious, I decided to trust the expertise of the Times editorial staff and clicked on the video.

After watching a 10 second commercial for a national bank, I was introduced to a gender-bending short film about three six-year-old girls who love to skateboard and dream of one day performing in the X Games.

From what I gathered, the news component was that these girls, known as the “Pink Helmet Posse,” unabashedly wear frilly tutus, glitter fingernail polish, and love to talk about castles and princesses. Plus, they can do a few skateboard tricks as well as the boys. That, it seemed, was the point: that girls can match boys but need a bit of supporting exposure to make it big. “Let’s get these girls to the X-Games,” the video seemed to say. “Let’s make their dreams come true.”

Hmm. What passes for news these days makes me think that I was clearly born at the wrong time.

When I was six, I played war with my brothers and we shared many a battle.

We’d search for the sturdiest stick and than rat-a-tat-tat over a small hill where we’d dramatically fall to our death. Landing authentically was a big deal, and the more anguished and sprawled out we looked, the better. We took votes on who died the best, though I admit I never won. Where was the video camera then? Wasn’t I showing early Special Forces talent?

Or maybe I could have made it with my tree climbing. Having older siblings to keep up with, I was fearless and nimble. Advancing on a tree, I’d throw a leg over a low branch and hang upside down while hoisting up the other branch. Then, I’d grab the trunk and inch along the bark to the next limb. Up the tree I went until I reached a vantage point shared by birds and squirrels. I admit, getting down was the hard part, but surely I was headed for mountaineering on Mount Everest. Alas, no one gave me the limelight necessary to propel my early career.

Maybe I needed friends like the “Pink Helmet Posse” in the Times video.

I did have Margaret, my best friend. I bet she could have helped with my visibility. We were seven when we built a fort out of old doors and erected it in my backyard. I learned how to hammer in a nail (and bent more than a few), but the fort stood on its own. We set down sleeping bags and planned to spend the night, but Margaret backed out.

She took off and let me fend for myself. I pretended not to notice the roly-poly bugs crawling on the ceiling. I could have escaped with her, but I had my pride. I built the fort and I was going to sleep in it. I made it through the night.

Had the camera been running it might have documented these early efforts, as well as my brief but illustrious career as architect and builder. After all, how many girls build forts and then drop out of construction industry? Girls can build too.

But I was probably born at the wrong time for national exposure in the Times, the paper whose motto reads, “All the News That’s Fit to Print.”

News these days is whatever keeps eyeballs on a page. A feature about girls in pink brings relief to those trying to cope with mass kidnappings in Nigeria and the disintegration of Iraq, which can make anyone feel powerless.

Promoting the dreams of young girls who giggle and laugh makes us smile. It’s what we can handle. That’s news worth watching.