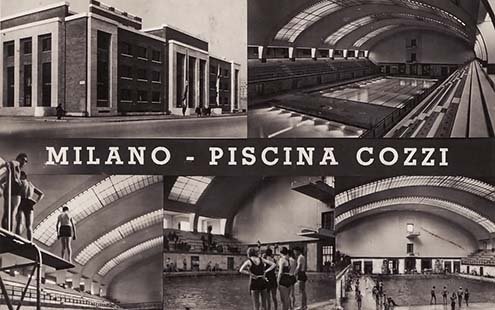 Designed by engineer Luigi Lorenzo Secchi and seen as a post-card worthy marvel of the Mussolini era.
T

he other day I braved the water of Milan’s Cozzi swimming pool after weeks of absence. A few of my skirts were tighter than usual and a writing project was stalled. The only way to loosen the skirts and justify not dealing with the writing was to get in some laps.

The Cozzi is around the corner from my house. It’s a huge temple to sport that built in 1934 and named for Roberto Cozzi, a war hero killed in 1918. At the time of its completion, it was Europe’s largest indoor pool. Its architecture is a uniquely 1930s combination of totalitarian bombast and art deco deluxe, palace for the people-style. The pool’s advanced reinforced concrete construction was widely admired at the time and led to the creation of an arched swimming hall the engineers of Rome’s ancient baths could only dream of. This hall features a tribune that doubles as a royal box and podium for medal awarding. The hall has three-story glass mural whose delicate backlit engravings of fish and bubbles are worthy of a transatlantic liner’s first-class dining room. Five diving platforms seem straight out of an Esther Williams film while rows of bleachers look like they could accommodate a Nuremberg-sized crowd cheering on the products of Benito Mussolini’s health and hygiene regime.

My first encounter with the Cozzi came during my children’s swimming lessons. Its paint was peeling and a net covered the soaring glass roof — to catch loose pieces before they fell into the 35-meter pool below. The locker rooms were moldy and the cavernous common showers with white tiles and overhead nozzles were decidedly sinister. To my Milanese friends, the Cozzi was the nexus of twin childhood terrors of cold water and sadistic teachers.

My children never complained about either of these, though I dreaded the weekly lessons. It wasn’t so much for the decay or creepy showers, but the conversation of the other mothers, which revolved around au pairs and upper class Milan’s weekend destinations. Would it be Santa Margherita at the Ligurian seaside or St. Moritz in the mountains? The latter was an ongoing source of anguish for one woman, whose husband shamed her by not buying a jewelry parure — matching earrings, bracelet, necklace and ring (tiara an optional) — good enough for St. Moritz. Why, she relatedly complained aloud, did her husband refuse to see that he could get her all the jewelry she needed if he’d just rent out their yacht in St. Tropez for a week? I still don’t know the answer.

About a decade later, a refurbished Cozzi re-entered my life as the source of exercise and writing avoidance it is now. Beige and slate tile now make the locker rooms look like a spa and the disturbing shower heads are gone. To my relief, the Cozzi’s most distinctive features were not touched. The diving platforms still soar above. Huge, round underwater lights (cue Nuremberg again) still make the pool’s blue tile glow, and the arched ceiling (still under net) is as ambitious as ever.

There have been other improvements, including a wheelchair lift and equipment for exercise classes. The conversation is more interesting too. Entering the communal shower the other day, I overheard one woman tell another “and, can you believe it, he ate right off the tablecloth?” Eavesdropping is irresistible. I once overheard an Eastern Europe woman describe the odyssey of arriving illegally in Italy.

In the pool area itself, lifeguard shouts and the screams of adolescents pushing each other dissipate into the vastness like tourist chatter in the streets or the sounds of Mass in a cathedral. The water temperature is indeed brisk (I admit) and I face the swimmer’s eternal debate: dive or ease in? I choose the former. At first I feel heavy and clumsy and it takes several laps to find my pace. Other swimmers — generally men with no technique — muscle by me. Then they stop and rest — and chat with friends — at the lane’s end. With my flip turns and my steady crawl, I pass them by.

Finally, I reach cruising speed and chug up and down the lanes. Repetitive thoughts and the distractions of daily news seem to melt away. My freed mind opens to that stalled writing project. Soon the sentences flow. Awkward transitions become smooth and paragraphs fall into place.

Before I know it, I’ve finished my laps and my writing project is done, if only in my head.

At home, I quickly get it on paper and work through revisions.

I’m no Mozart. But I think that when Mozart said (maybe apocryphally) he was able to compose quickly because it was all in his head, this is what he meant. The actual writing was merely the tip of his creative iceberg.

Mozart came to Milan three times between 1769 and 1773, staying for several months on each visit. The Cozzi is only blocks from where he lodged. Just imagine what he could have achieved if the pool had been available.