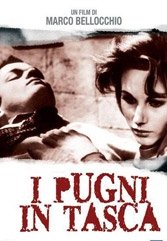 Italian director Marco Bellochio’s debut feature I pugni in tasca endures as a period-piece manifesto against stifling middle-class conventions and a striking forewarning of the student revolts that would follow in the years after its 1965 release.

Set in the provinces of north Italy, the film portrays family of five, a blind mother (Liliana Gerace) and her four adolescent children, all but the oldest afflicted with epilepsy. They are social outcasts unfit to function properly in the real world stuck knee-deep in denial and boredom.

In this stagnant environment, Alessandro (played by Lou Castel but dubbed into Italian by Paolo Carlini) loses track of ethical boundaries, flirting incestuously with his sister Giulia (Paola Pitagora) and concocting a mad plan to free older brother (Marino Masè) from his deadweight family. His idea is to euthanize family members one at a time. Alessandro’s disturbed antics lead to the demolition of family values and Catholic morality. The film leaves unanswered fundamental questions about Alessandro. Perhaps he isn’t entirely responsible for his own madness. Perhaps the deaths aren’t murders but disguised suicides.

The film earned Bellochio the title of Italy’s “great psychologist,” with fellow director (and writer) Pier Paolo Pasolini suggesting that Bellocchio’s focus on prose and content represented the antithesis of Bernardo Bertolucci’s “cinema of poetry.”