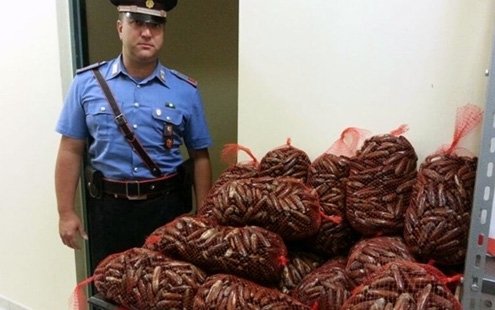 Italy has begun actively policing the illegal harvesting of datteri di mare, or date mussels.
I

taly is for the most part surrounded by sea, with the peninsula and its two large islands lapping up against various parts of the jagged Mediterranean. This makes most Italians very familiar with fish. Given such extended coastal real estate, it is hardly surprising that most Italians are raised catching, cooking and eating fish.

As a child I loved the act of fishing but hardly ever ate fish with bones. I was one of those kids parents dreaded, the ones too freaked out by le spine — bone or cartilage — to fully enjoy a meal of aquatic edibles.

But mine wasn’t a total embargo: I was simply more of a polipi kind of kid. All summer long, I’d go surface diving on rocky reefs along the coast, between small fisherman towns. I belonged to a small mixed bag group of children and teens whose parents all knew each other, the comitiva Italians commonly hang out with during vacations.

We’d set off early in the morning with our blue and red canvas materassini (inflatable rafts), snorkeling masks and a shred of cloth tied to a piece of string. When the sea was calm, we’d get permission to swim along the coastline to reach a designated fishing spot. We’d scan the shallow rocks beneath us, half clinging to the materassino, our heads plunged just below the waterline. We’d let the string unfurl and start teasing the octopi. Wave anything at them, like a piece of cloth tied to a string, and they’ll flee the safety of their hiding place, and float up to chase the billowing fabric like kittens. My posse and I could farm as many as 8 to 12 polipi in a little less than three hours, coming home from the expeditions loaded with lunch. None of us were scared by the cephalopod’s suction cups or by their wriggling, slimy bodies. Everybody at the table was happy about our exploits.

Now I’ve grown too old and buoyant to carry on with such marine harvests, but fish is still a huge part of my weekly eating routine. Living in a big city or a small coastal town changes nothing. Tuesdays and Fridays are the best days to shop for fish in neighborhood markets throughout the peninsula.

Fishmongers are considered family, and it’s considered folly to betray a solid relationship based on mutual trust and habit by straying to another seller. Trusted purveyors — recipients of large part of our earnings — reserve the freshest fish for aficionado customers. They gut and clean the catch for free and lend a few cooking tips to boot. Infants in Italy are weaned off mother’s milk eating healthy basics: pureed vegetables, ground cereal and pulse diluted by omnipresent broth. The first solid protein to enter their bodies is steamed white fish, deboned and reduced to a soft pulp, dribbled with the finest olive oil. Italians consider consuming fish a natural, obvious choice, not one dictated by fashion or newfangled health decrees.

Historically, eating fish was always reserved for the rich. This changed over time. But the demand for pricey fish in the modern age has come some downsides. Industrial northern Italy gradually gave post-World War II Italy a loftier lifestyle, which came with an increased demand for gourmet dining and fresh fish. This in turn brought a slow and deadly exploitation of the Mediterranean’s resources that continues to this day. Ecology watchdogs fight over-fishing, trying to rein in the countless unlicensed boats that work outside the law and shrug at environmental protocols. Reckless fisheries ignore new and old restrictions, as they’ve done for four decades. Banned fishing methods such as bottom trawling continue unpunished. Nets are dragged along the ocean floor to catch more fish, but they also rake away sea life such as coral and precious seaweed, both of which are necessary to maintaining the delicate balance of the underwater environment.

Until 1988, when harvesting datteri di mare (date mussels) became a felony, miles and miles of rocky coastline were systematically destroyed. The endangered mollusks take around 80 years to mature in their underwater cliff holes. To ferret them out, illegal fishermen used dynamite.

All kinds of Mediterranean Sea creatures are now imperiled. Fortunately, Italian fish consumers are increasingly aware of the peril and are hopping on the eco-bandwagon, choosing what goes in their plate more responsibly. Many avoid — and even report — restaurateurs who illegally offer datteri di mare. They even shop for fish with a seasonal biodiversity calendar in mind. For a seafood-loving nation, it’s about time.