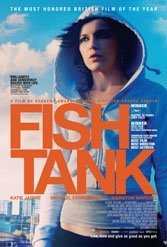 British writer-director Andrea Arnold possesses the rare gift of understanding empathy and knowing how to convey it without resorting to cliché or the maudlin. She takes meticulous aim on life’s small stories and lets them develop through sighs, breathing, grimaces, and small bursts of dialogue. Her centerpiece characters behave like time-lapse petals opening in response to stages of light. “Fish Tank,” her superb second feature, is a confident exercise in emotional physics focused on a 15-year-old girl’s tumultuous coming of age.

Project-dwelling Mia (Katie Jarvis) can’t decide between rage and recalcitrance, so she adheres to both. She’s a feral tomboy who lives with her single mother and young sister in a cramped East London apartment. She likes rap music, break dancing and freeing anything in chains, including herself, or so she thinks.

But when things predictably go too far, her mid-teen reality collides with an adult world she’s considerably less able to boss around. Recalcitrance is replaced by jealousy and confusion, and that’s ominous territory.

Arnold is not out to solve anything or dish out happy endings. She just provides a running snapshot of a young woman who knows both nothing and too much at once, with “Life’s a bitch…” as lyric of choice. Jarvis, who had no previous acting experience, is stunning, given shape by Fassbender, who, as always, elicits the best in those around him. The result is compassionate realism at its very best.