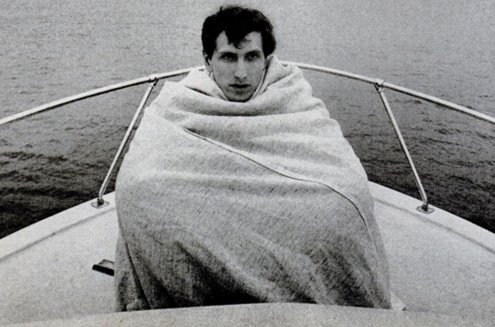 Fischer as photographed by Life magazine in Iceland in 1972.
P

etulant, volatile, paranoid, belligerent, insufferable, mercurial — Bobby Fischer was all those things and more. And very likely mad as a hatter. He was also arguably the greatest chess player of the 20th-century if not of all time. His 1972 defeat of Soviet champion Boris Spassky in Reykjavik, Iceland generated fair bit of frission at a time when the Cold War was running very, very cold for the Watergate and Vietnam-addled United States. That summer, with mass media beginning to acquire hyperbolic glee, billed by one network as “the poor kid from Brooklyn against the whole Soviet empire.”

Director Edward Zwick, with an assist from Tobey Maguire as Fischer, has created a stirring (if occasionally maudlin) fictional reconstruction of Fischer’s rise from a self-loathing Brooklyn Jew in the early 1950s into a Soviet-hating, anti-Semite who also played chess at a level few had ever seen before. At a time when Cold War movies are in vogue — see “Bridge of Spies” —here is yet another.

Insulated from the world and nursed along by a bizarre duo of chess grand master and Catholic priest William Lombardy (Peter Saarsgard) and spook-cum-fixer lawyer Paul Marshall (Michael Stuhlbarg), Fischer bullied his way into the chess limelight by demanding special treatment and cash rewards that at the time defied the etiquette of the non-capitalistic game he played, but rewards he believed the evil Soviets reaped. The same Soviets (and Jews) who bugged his phones and made his presence in the elite chess arena erratic until the Reykjavik showdown was arranged against all odds. Suddenly, Fischer was the weirdest of American celebrities.

Maguire’s cantankerous, child-vision like portrayal suits his style; he’s slightly oval. Fisher instead was narrow, wiry, with a strong smile. But fiction is fiction, and it works. Maguire in on point in portraying a man so bedeviled by conspiracy theories he’s rarely able to focus on chess for any length of time. But Zwick wants to construct a credible anti-hero stuck in the Cold War squeeze (hence “pawn sacrifice”), and in that he succeeds. “Bobby has problems,” Lombardy tells Marshall early. “So did Mozart,” Marshall replies, assuring Fischer later receives cheerleading calls from Richard Nixon and Henry Kissinger. Fischer supporters still insist that some of his unpredictable behavior was pure grandstanding, defense mechanisms or “psychological props” to gird himself and unsettle opponents.

What gives the film its heart, however, is Liev Schreiber’s engaging Russian-speaking performance as the huffy, perplexed but respectful Spassky. Game six of the 1972 championships, hailed by many experts as the greatest match ever played (and won improbably by Fischer), left Spassky to stand and applaud Fischer in pure admiration — something the credible Schreiber pulls off with amazing grace. In fact, Zwick brings a thriller’s focus to those critical matches, and to Fischer’s lunatic antics (though no reference is made to Fischer’s true response to Spassky’s applause. “Did you see what Spassky did?” he told Life reporter Brad Darrach. “Did you see him applaud? That’s true sportsmanship…”)

In its downtime, “Pawn Sacrifice” is mostly a trip down 1960s and 70s memory lane, with period-piece music (all hail Grace Slick) and newsreel footage anchoring Fischer’s slow and eccentric march up the ranks. Thankfully, Zwick ends his homage with the Iceland triumph.

After that, Fischer’s madness took center stage. He was arrested for vagrancy in 1980, railed for decades against Soviet and Jewish plots, barely escaped U.S. prosecution, and was finally granted asylum in Iceland, where he died in 2008. “I’m about the game,” Fischer tells an interviewer early on. But in fact the game and its beauty was only a fraction of his neuron-stew mind, which like the minds of many geniuses was eventually hemmed in by its own terrors.