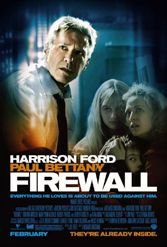 Isn’t Harrison Ford (bank security chief Jack Stanfield) is getting a little old to jump through all these action hoops? The high-tech part of Richard Loncraine’s heist-hostage-Internet flick is OK, but Ford’s family-man-with-revenge-in-his-eyes look is losing appeal and credibility. The danger is watching Ford amble down a fork in Woody Allen Way, doing macho until he’s 75, to ever-diminishing effect. Hollywood is just beginning to embrace hacking as a standard theme (“Honey, I need to borrow your iPod.”). But there’s a long, long way to go. Paul Bettany, an alert actor, is wasted in hackneyed bad guy role.