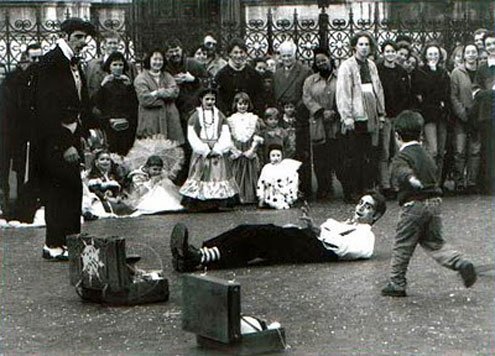 Clowns in the afternoons...
Y

ou’d need a wormhole to go back to Piazza Navona of the fire-eaters. Getting to today’s version requires crossing a park and latching onto fashionable streets whose sidewalks burst with assembly line tourists for whom proof of being and seeing is the fecund hatching of digital squares. I spent years politely ducking out of snapshots, often smiling goofily and wondering how many times I’d been included inadvertently in the lives of others. That was before deletion became a tic.

These days Rome is more boisterous than ever and I play tourist companion less often. The cramming percussion of cars, mobile phones and eclectic alarms brings to mind a loud cocktail party from which there’s no escape.

That’s not to say today’s Piazza Navona isn’t vivid. Sketch artists, performance artists (mummies and cowboys) and passing musicians squiggle through a postcard setting guarded by maternal garbage collectors who stick the ample public detritus into rat-like vans that scurry in and out of piazza at regular intervals.

For an often-unkempt city that often feels like an ancient mop of tousled hair, the sandblasted piazza is positively dapper. It’s even well-patrolled, a half-cocked kind of vigilance since the police don’t actually seem to do very much.

Once they did, busting clochard-style drug addicts and tear-gassing indefatigable protestors, since the piazza was a venue for demonstrations. What most stood out was the dinginess. Piazza Navona looked like vagrancy might feel, dank and crotchety with syringes under foot, the same as tumbledown Campo de’ Fiori, but that’s another story.

I met the “old” Piazza Navona in the prehistory of my twenties, which began while Richard Nixon was still president. It was pretty, yes, but more carnal than digital, a campground for the carnival slivers of a barking netherworld whose presence clashed with the developing middle class mores of the mid-20th century.

It was also literally incendiary.

I don’t know where they came from, the fire-eaters. On any given night the piazza usually had two, one on either side of Bernini’s Statue of the Rivers, swarthy, sweaty men, tiny ones too, like characters out of Fellini’s “La Strada” but kerosened. Near the fire-eaters were the sword-swallowers, sideshow men who made clattering sounds in the hot shadows of the flames. On the fringes were the crippled and the deformed, elves on carts, lunatic half-moons of misdirected flesh begging for small change from low-lying cobblestone bleachers. This medieval night shift emerged only after the afternoon clowns and magicians cleared out.

Sometimes the fire-eaters vied against one another, competing over who could spew the highest arc, vomiting fat balls of flame that snarled end-over-end upward like whooping tumbleweeds. Children cried mangiatore di fuoco! and demanded that their parents bring them closer. Few if any took pictures; flash photography was ineffective. Tourists were infrequent, some cowed by the claustrophobic foreignness of the scene. A fire-eater named Bruno blew flames from his nostrils. The children oohed. Their parents dropped coins.

A sword-swallower named Lucio, a midget, downed a blade seemingly longer than his full height. Near him sat a three-legged dog with sweet disposition and a pink bow tied around his neck. The dog hovered over a cup near a cardboard sign that read per me, “for me.” He barked gently whenever coins were dropped in the cup.

Men out with their wives or girlfriends would knowingly explain the tricks employed by the fire-eaters (they lit their breath at a distance) and the sword-midget (he had no gag reflex and the tip of the sword folded). But the knowing didn’t make the spectacle any less feral. These were strange apparitions resistant to the modern world, people whose tricks, like those of tightrope walkers, shooed away cynicism by tapping into the succulent attention of briefly-awed bystanders. Risk was a challenge, and honorable. The idea of safety seemed not only remote but also irrelevant.

The conditions for such thinking and acting are long gone. Urban order is more self-conscious and public eccentricity discouraged. Monstrosities and exaggeration are confined to pixels. As for Piazza Navona, the last of its circus-show antics disappeared toward the mid-1980s, when the prime minister of the time decided to live in a hotel around the corner (the Raphael) and Italy gussied up to host the 1990 World Cup. The Vatican was also busy prepping for the Holy Year 2000, spending millions to redecorate its back yard. Fire-eaters were not invited to that party, unless to pray.

The savage was chased away and Piazza Navona gradually cleansed. Eccentricity got a more upscale pedigree (a performance artist Tutankhamen is no fire-eater) and the deformed beggars made to recede — though once in a while I see, or think I see, a legless man on a tiny skateboard. He usually remains parked on the fringes of the piazza, as if afraid to roll any nearer. Maybe he senses that he’s lost his birthright to enter the once-friendly square. If so, he’s right.