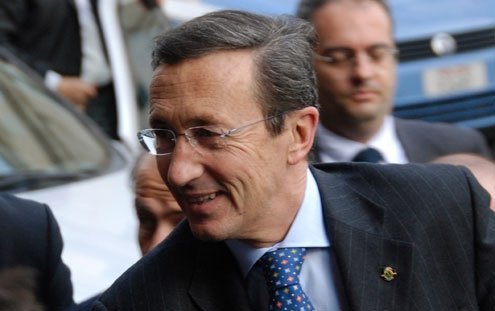 At 57, Fini is already a political veteran.
N

ot all Italians are glued to the Berlusconi soap opera, especially those in his own government. Carefully-coordinated visits to their leader in the hospital after a dramatic attack looked less like consolation than positioning for the day the Berlusconi show is cancelled or goes off the air.

In an acid political climate, Renato Brunetta, the public administration minister, jousts publicly with Giulio Tremonti, the finance minister. Meanwhile, the media vie to predict the fate of Berlusconi and the possible alliances and personalities who might succeed him.

Gianfranco Fini, Berlusconi’s former no. 2 and now president of the lower house, is widely regarded as a key figure in any post-Berlusconi configuration. Without clearly stating his intentions, he makes one smooth strategic move after another.

Fini is a longtime Italian political player. Now 57, he was groomed for leadership two decades ago in Italy’s Movimento Sociale Italiana (MSI), the neo-Fascist party founded by the late Giorgio Almirante, the leader of the country’s hard right for decades. Throughout the 1960s and 70s, both the MSI and its Fronte della Gioventù youth movement (to which Fini belonged) were seen as political pariahs. At the time, the extreme right was as deeply involved in terrorist violence as its romanticized left-wing counterparts, Lotta Continua and the Red Brigades, abetted by the right’s real and presumed connections with the country’s military, police and secret services.

Though Fini lifted his palm in the Fascist salute at Almirante’s 1988 funeral, he has since moved on. In 1995 he founded Alleanza Nazionale. Composed of mostly moderate rightists, the party repeatedly backed Berlusconi before being incorporated into his Popolo della Libertà, formed before 2008 elections. Though Fini served as deputy prime minister and foreign minister in the 2001-2006 Berlusconi government, his counterintuitive, outspoken positions often irritated both his boss and his putative allies, such as Umberto Bossi, who heads Northern League.

Since Fini assumed leadership of the Chamber of Deputies, which further distanced him from Berlusconi, he’s ramped up his challenge.

Fini has a rightist background, but his controversial positions are not exactly typical-and not just for the right. In 2003, he visited Israel and denounced the Holocaust. More recently, he acknowledged the historic value of the anti-fascist movement. In strongly Catholic Italy, he said scientists and doctors, not politicians, should regulate RU 486, the so-called the “morning after pill” And he supported civil unions. He defended courts that ruled against Berlusconi.

In a political scene that runs the gamut from flamboyant entrepreneurs to disgruntled workers, Fini’s levelheaded style is atypical too. He’s a bean-counter in a gray suit, a man of common sense and a clear-headed thinker in a nation of hotheads. Speaking to a packed house at the Corriere della Sera Foundation during his book presentation, his simple, workmanlike rhetoric was well-prepared but not stiff; personable but not glib. After years of leading an ostracized party, he shows little need to be liked.

Fini’s book is atypical too. It is addressed to the young, otherwise on the lam from Italy’s geriatric political scene. Its language is straightforward, free of the hectoring and posturing characteristic of traditional political doublespeak. Its 165 pages make it a briefer read than most politicians’ stump speeches.

He bills the book as a “letter” on the 20th anniversary of the fall of the Berlin Wall. His advice is contained in chapters on history, narcissism, secular politics, the “hope called Europe” and the possibility of new pacts, between generations and toward a new notion of citizenship. The “new world is already here,” he insists.

For half a century, he argues, antagonistic poles — pro- and anti-Communist followed by pro- or anti-Berlusconi — fought political enemies rather than focusing on governing. Compromise meant capitulation. Thwarting a rival was confused with legislating.

Fini wants the post-Berlin Wall generation to transcend this, to live in the present and solve its problems rather take up old battles. It must accept risk, but not succumb to fear. It must seek “modernization, not the logic of a permanent emergency.” Young people should support nonno, not live off his pension.

If he is to supplant Berlusconi, Fini knows he must first redefine the “right.” This means simultaneously distinguishing it from its post-war past and attracting educated, pro-free-market and socially liberal voters, the ones who felt most betrayed when they realized Berlusconi was more interested in solving his own problems than Italy’s. He must also work to persuade and convert that part of the electorate — again, probably well-educated borghese — whose 1960s tribal political instincts would otherwise be too strong to allow them to vote for a former sworn enemy.

In the book’s first two chapters settle scores with his 1968 generation, which he labels as “chronic whiners.” He argues that many forgot their father’s post-war achievements and combined “social rancor with intellectual arrogance,” transforming a “social state” into one of entitlement. The hedonism of ’68 later degenerated into the narcissism that now characterizes Italy’s superficial television culture.

He seeks what he calls “constitutional patriotism,” intended to “protect people from aggressive nationalism and racism.” Immigrants add 10 percent to Italy’s GNP, he notes, and their contribution should give them the right to vote at least in administrative elections. He echoes an old saw about making new Italians; only that the newest set of new Italians “come from countries and cultures far away.”

In the Fini state, biomedical questions will be faced with “faith in secular ethics free of the certainties of ready-made ideologies.” The time has come, he adds, to invest in an educational infrastructure and put a meritocracy ahead of “friends of friends” society. He preaches religious tolerance and a compact between North and South that goes beyond “stitching up old wounds.”

Even professional commentators aren’t sure. Some have suggested he should be expelled by his own party; others that his center-right notions sound more like center-left ideals. Fini’s own spin-doctor, Sofia Ventura, suggests caution towards Fini’s leftist guise. “One day we will start sounding like we’re on the right and they’ll kick us out,” she says.

Other commentators want to know what form Fini’s ideas will take and what his strategy is. They also wonder who he is now and how it fits with his past.

And well they might. Fini has redefined himself. He is redefining the Italian right. In the end he might also redefine Italian politics. And it’s about time.