Fine dining in a different key 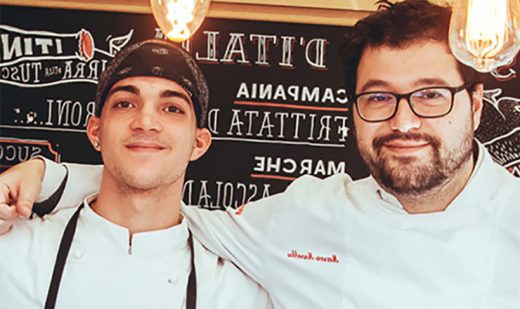 Marco Marcello in his stand, or box, at the Testaccio market.
I

t’s a Saturday at 10 a.m. and American expat Nurit Roded sips a cappuccino in the heart of Testaccio market. Vendors take their places behind stalls as the aisles gradually become hives of activity. They wield pizza-cutting scissors, prosciutto-slicing graders, and an array of cheese spreaders — all of them ready to stab. Their aprons are fastened tight as plated armor.

It is clear these food-selling gladiators are preparing for Saturday invaders by the hundreds.

For 13-year Rome veteran Roded, who once lived in Brooklyn and is now active in helping refugees, watching these noisy preparations is hardly a new experience. What is new, or at least new in approach and flavor, is the addition of ready-made meals in the form of street food. The venerable market even has an outlet called “Strit Fud,” the phonetically spelled out Italian version of what has become a global English term. However you choose to spell it, street food is beginning to make its presence felt.

Mordi & vai, roughly “Eat and go,” is another Testaccio staple.

“Food is obviously a big part of the Italian lifestyle, and part of the Italian tradition is to go to restaurants for long meals,” says Nurit. At the same time, she’s noticed a growing trend toward quick eats, which a walk through the market bears out. Common are stands selling juicy pork-filled sandwiches, fluffy focaccia, and fried artichokes flipped stem up. Others deal in long colorful spreads of pizza al taglio or the handheld triangle bites called trapizzino.

Though all these items are in one way or another deeply rooted in Rome tradition, they’re increasingly available in nooks, crannies and markets for those on the go, who don’t mind talking and eating. Stand-up munching is no as longer frowned upon as it once was, when even the city’s working class population was expected to pause for lunch at the local eat-what’s-served osteria (or scurry home, as some still do).

Historically speaking, the concept of street food dates to the Roman Empire. According to entries in 2013’s “Street Food Around the World: An Encyclopedia of Food and Culture,” most of Rome’s ancient population lacked the means to cook at home. Street vendors and cook shops were essential to keep hunger in check. Over time, these ancient venues grew in number, appearing outside the Forum and Coliseum. A popular ancient food was panis ac perna (Latin for “bread with something in the middle”), a kind of grape must and ham panino cooked in water soaked with dried figs.

The Testaccio market itself (and much of hilly Testaccio) sits atop of an ongoing archeological dig known for having yielded up a treasure trove of ancient clay jugs known as amphorae. The mound-like remains of these jugs highlight the role Testaccio played in the everyday life of the ancient city. Situated along the Tiber’s banks, Testaccio was a docking station and a hub for the trading of wine, wheat, oil and other commodities. Archeologists believe the area was packed with warehouses, boatsheds and included markets where food was sold or eaten on the spot.

With this kind of past, is it even appropriate to call street food a trend?

For Marco Marcello, who owns a Testaccio stall called Food Box, trends depend not on their timing but on the nature of the food being served. “What makes street food revolutionary in Rome is that people are now experimenting with traditional dishes. You’d never see this in a classical Italian restaurant.”

In fact, though the city’s trendier restaurants tend to embroider food in keeping with the big-city culinary avant-garde, old school restaurants generally steer clear of experimentation, depending instead on staples known the world over.

“When I decided to participate in the street food experience by opening Food Box,” says Marcello, “I wanted to fuse the Roman food I grew up with food from all over Italy and around the world.”

His menu reflects this eclecticism. It boasts dishes influenced by southern Italian regional cooking, as well as Sicily. At the same time, he also offers tidbits from France and Mexico. He sells traditional Supplì alla Romana, ever popular rice balls (usually with cheese or ragú), but also creates variations all his own.

The Food Box isn’t alone. In general, the Testaccio market uses street food as a kind of platform to experiment with traditional Roman cooking. Arguably the most famous stall among food enthusiasts is Sergio Esposito Mordi & Vai (roughly, Eat and go”). He has concocted panini stuffed with pasta sauces, including carbonara or amatriciana. He serves rolls filled with polpettone della nonna (meatballs in tomato sauce), toppings usually reserved for table-setting pasta.

Despite the proliferation of food stalls in local markets, the trend has yet to take off in Rome as a whole.

Esposito opened the stand in 2012. Within a year, the country’s most eminent culinary magazine, Gambero Rosso, gave him an award for the best street food in Lazio, the region that hosts Rome.

But not all aspects of the street food are acclaimed. Purists say the trend hurts the age-old Italian tradition of family dining, especially on weekends. Youthful Rome native Costantino Piscini waxes nostalgic when he considers the overall impact of the street food movement. “It’s sad,” he says, “that me and my friends don’t cook at home as much as our parents and grandparents do. There are so many recipes that my generation doesn’t know how to cook…

“Everyone,” he adds almost poignantly, “is eating more alone.”

Some say the street food movement is hostile to the environment, contributing to the “throw-away” culture that produced abandoned plastic bowls and utensils. Others say it breaches decoro urbano – a subtle way of suggesting the change in urban decorum threatens the city’s habits and lifestyle.

These critics insist that’s the reason the trend has failed to acquire widespread local popularity, with most residents still preferring to grab a traditional panino or sitting down.

Says Costantino: “Seeing a food van at a festival is fine, but I wouldn’t want to see food vans lined up selling food on the streets of Rome. Seeing people eating food while walking down the streets is not something I’d call beautiful.”

But not even Costantino is immune. In fact, he’s just picked up a saccottino di verdure (veggie pocket) from the La Città dell’ Altra Economia’s farmer’s market (an alternative to the Testaccio market, which is closed on Sundays). It may not be a beautiful sight, but even Costanino admits it’s good.

About the Author: Alexa Chase Caesar