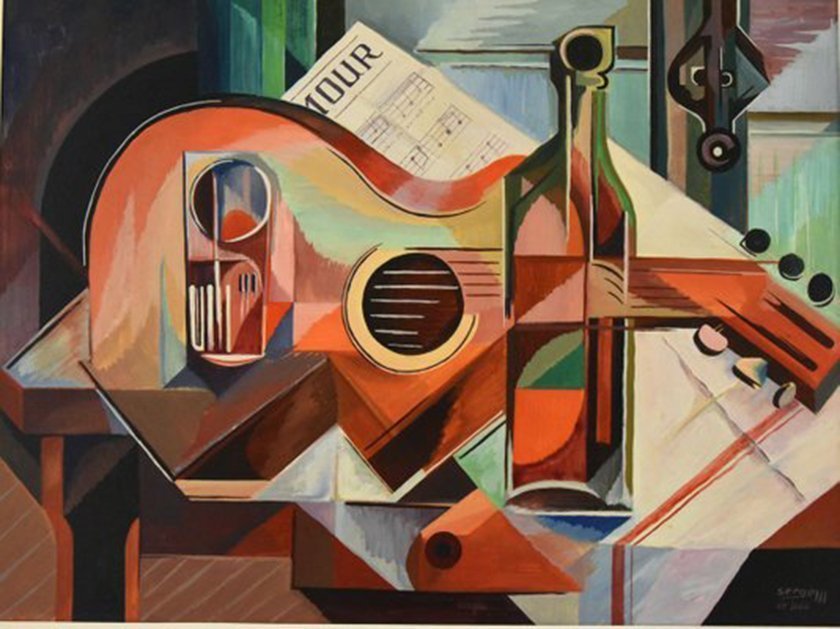 he lights are regulated correctly, there is a perfect distance between my bass and the amp, between my mouth and the mike. I glance toward my friend holding his vibrant red electric guitar. He starts the intro, and I join in on the bass notes, beginning the words hesitantly.

He deals the cards as a meditation . . .

It is March 23. Right in the middle of the cannon fire of exams and orals, our music school has organized this concert in Flers, a town that I have come to know as well as the lyric sheet on the music stand. The concert showcases the musiques actuelles groups — that is, the small groups of students at the music school playing contemporary music.

The song’s narrative reminds me of a novel opening that I wish I could have written, philosophically likening a card sharp’s impenetrable game to the elements that can obstruct the understanding of love in a relationship.

The six-piece group, of which I am a member, has worked hard for this performance, with our de facto band leader, who teaches electric guitar, being forced to listen to us practice day in and day out. Since September, we have rehearsed every Thursday evening in a soundproof room. The circumstances here are extraordinary: For many of us, it is the first concert we have done in two years. For some younger musicians, it is their first time taking to the stage as a musicien actuel, in a context radically different from small-scale recitals where parents have to do more cringing than applauding.

The term “contemporary music” is elastic. The repertoire encompasses songs once sung by slaves in plantations (the concert opens with an a cappella rendition of a work song by all musicians and teachers together), the Beatles, Led Zeppelin frontman Robert Plant, American rock band the Strokes, and even Maria Callas — our group delivers a rock rendition of a piece from Georges Bizet’s French opera “Carmen,” with which the late soprano was associated. My aforementioned bandmate and I have been allowed to prepare three songs on our end, including this one, which he chose: “Shape of my Heart” by English singer-songwriter Sting.

I was already acquainted with this ballad but have grown to know it better. Its third- and first-person narrative reminds me of a novel opening that I wish I could have written, philosophically likening a card sharp’s impenetrable game (“He deals the cards to find the answer / The sacred geometry of chance”) to the elements that can obstruct the understanding of love in a relationship (“I’m not a man of too many faces / The mask I wear is one”). Considering the terrifying news we have received of such devastations as the Ukraine war and the near-fatal shooting of five people (with almost two dozen injured) on a Brooklyn subway, Sting’s lyrics today somehow reach a poignant universality.

The practice work that I did over Zoom with a family friend who is a vocalist has taught me how to add subtext and personal elements to help inhabit the moment that is being shared with the audience in the dimmed concert hall. “It’s your presence you’re giving,” she told me. I want to hold tight to the notion like a mantra for future performances — although the future has little meaning in the moment — but certainly try to keep it for the final piece of the evening, a rendition of the song “Do I Wanna Know?” by British band Arctic Monkeys in which I hoped to use a more theatrical approach.

The applause that comes at the end is considerable, and as we take our bows and leave the stage, my previous thoughts return: the anger at former friends, the pressure of schoolwork, despair at the plight of refugees. Yet all these things are seen now in a different shade. Things do not seem quite so bleak. And I think also of one of my inspirations, Kurt Cobain, the Nirvana frontman, who on the eve of his unplugged concert in New York was so petrified under the influence of drug withdrawal that he felt he could not perform. And yet he did perform.

The applause that comes at the end is considerable, and as we take our bows and leave the stage, my previous thoughts return.

After most people have left, my girlfriend and I wait patiently for her mother to pick her up, against the wall of the theatre. It is a dignified structure likely dating from the 19th century, when Flers prospered during the Industrial Revolution. At the center of the square where it is located stands a memorial to the local soldiers lost to two world wars and the Algerian War.

We have an oral to present in our history class tomorrow. “Don’t be surprised,” I say, “if I’m a bit tired tomorrow.”

She smiles and says she understands. We agree that the evening has been a good one — both fun and, somehow, important.