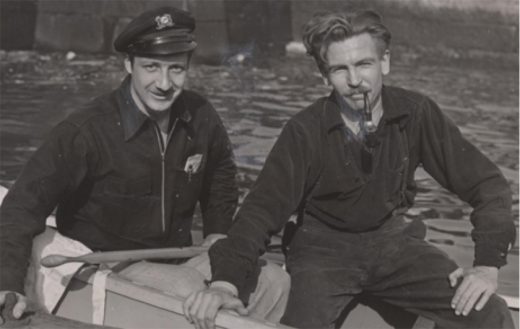 Bob Fuller, right, pictured at the Battery, Manhattan in May 1938, in the canoe he took to Alaska.
M

y father disappeared from my life when I was 6 years old. My memories of him — the man named Bob — are few, fragmentary, and not happy. One of the more vivid ones is a nightmare I had after he was gone. It was a dream in which he was chasing me down a cold gray beach, caught me, and stuck a large hypodermic needle under my kneecap.

My mother said that he was never physically abusive, but it is safe to say I had no pleasant impression of the man. Mostly, he wasn’t there because he was in a bar drinking up the rent money. When my mother threw him out, she told him he could not see my brother and me unless he paid child support. And that was that. He was gone.

In 1971, he was knocked down and kicked to death by a drinking buddy who thought my father was making time with the buddy’s ex-wife. The murderer served a year in county jail. My father’s body was brought to San Diego by his mother and father and buried there.

That would be the end of this story, but then in 1995 chance put a large blue binder in my hands. In it, I was astonished to find letters written by one Richard Slobodin to my father’s sisters about a trek he and my father had undertaken in an 18-foot wood and canvas canoe back in 1938 and 1939 from New York City to Fort Yukon, Alaska.

Slobodin and my father had lived in the same building on West 52nd Street in Manhattan in 1938. A high school teacher, Slobodin needed a bookcase built and had heard that my father was a woodworker. That neighborly inquiry was the beginning of a long friendship.

Meanwhile, the friend of another tenant came through town. This friend’s name was Mark Richelsen, and he billed himself as an outdoorsy explorer-kind of guy. He was looking, he said, for a couple of similar kinds of men to travel with him from New York City to Nome, Alaska, by canoe, to which my father and Slobodin apparently responded, “Oh, hell yeah!” or something to that effect.

Slobodin had to finish out the school year, so it was agreed that my father and Richelsen would take the first leg up the Hudson to Winnipeg via the Erie Canal and Slobodin would catch up with them there. Upon arriving in Winnipeg, however, Richelsen found out that he had a newly pregnant girlfriend back in New York. So he dropped out, leaving my father and Slobodin to continue the trek alone.

My mother had never told me … about my father’s personality except that he was a lazy drunk.

Up to Winnipeg, the journey had been over inland waterways, but the plains of Canada did not have appropriate east-west rivers, so they put the canoe on a train for the 700-mile journey to Edmonton and hopped freights along behind it, narrowly escaping arrest at the railroad yards of Saskatoon, Saskatchewan.

From Edmonton, having retrieved the canoe, they paddled north to the Slave Lakes, thence via the Peace River to Lake Athabasca, and from that point on down the Mackenzie to Fort McPherson. It was there they wintered, 70 miles above the Arctic Circle. Slobodin spent those months learning the rudiments of Gwich’in, the local indigenous language.

In the spring of 1939, they took the canoe and its 300 pounds of supplies west via dog sled to the Rat River and then spent many long days pulling the canoe upstream through frigid waters flowing with broken ice to the top of the cordillera. On the west side of the divide, they descended via the Little Bell, the Bell, and the Porcupine, which debouched into the Yukon River. They sold the canoe at Fort Yukon and made their way by stages back to the Lower 48, by then having traveled 6,000 miles.

Slobodin in the Northwest Territories, 1949.

For Slobodin, this excursion was the beginning of a lifelong devotion to the study of anthropology, that of the Métis peoples of the Northwest Territories, specifically. His studies back in the U.S. were interrupted by a decade of McCarthy-era persecution. During that period, he worked as a carpenter’s helper, truck driver, clerk, and so on, but ultimately he was able to go back to school and receive his Ph.D. from Columbia University in 1959.

He went on to found the anthropology department at McMaster University. Over the years, he made several trips back to the Northwest Territories and wrote books and papers about the First Nations people who lived there. He taught at McMaster until he retired, eventually passing at the age of 89 in 2005. He was a scrupulous scientist and a lovely man. A book of essays by fellow anthropologists describing his life and work is called “A Kindly Scrutiny of Human Nature.”

Reading Slobodin’s letters in the kitchen of the woman who gave me the binder was a dizzying, emotional experience. My mother had never told me about any of this history or anything about my father’s personality except that he was a lazy drunk. But in his letters to my aunts, Slobodin writes:

[Bob] was a brilliantly intelligent person, skilled in many ways, courageous, and what in later years would be called a caring person — that’s what led him to radical views (as it did me). He was undoubtedly the wittiest person I’ve ever known in a long life wherein I’ve met some remarkable people. I cannot imagine a better companion for a long, fairly arduous, and sometimes lonely adventure, such as we shared. . .

Early in the winter at Fort McPherson, a Coleman lamp I was trying to light caught fire. I stared at it. I might not have stared for long — in fact, it’s certain I wouldn’t have. Bob jumped at me, grabbed the lamp with one hand, yanked the cabin door open with the other, and threw the lamp. The lamp exploded in mid-air, like a grenade.

Learning who my father was in this way when I was already in my early 50s and he had been dead for a couple of decades — after I had spent my whole life dismissing his existence as meaningless to me — turned everything upside down in an instant.

In the end, I was left with the feeling I had spent my life feebly and ineffectually trying to imitate this man and this father, a larger-than-life character I had never known.