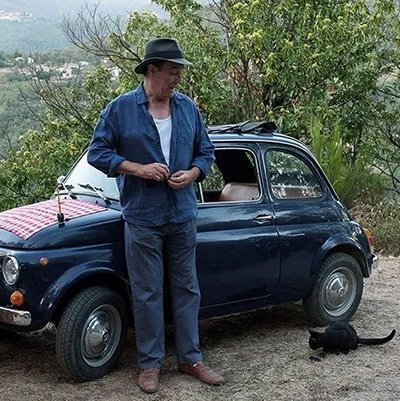 The poet W.B. Yeats wrote, “Your beauty can but leave among us vague memories, nothing but memories.” What appears as something familiar might be nothing more than coalescing desires returning to confound, if not haunt. The line between what is forgotten and the still retained happiness of bygone days may be obscure, but that line is what binds us to our past.

Perhaps the line here is the indeterminate road traveled in this deferential collaboration between veteran film composer Warbeck (Shakespeare in Love (1998), Billy Elliot (2000) and documentarian Davidson (The Sweatbox (2002).

The trip starts out plainly enough as “the Man,” the perfectly cast Hinds, sits at an outside café. After witnessing what looks like a crime, the Man folds his oversized body into an extremely small car and leaves in a hurry, though not before briefly gazing at a framed photograph of an unknown woman.

What unexpectedly follows is a random tour along the dreamy French countryside via a route oblivious to time, while connecting locations and scenery that seem to fold in on themselves. Like pages of an atlas that have become unbound and scattered, discordant episodes direct him to turn at unmarked landmarks where he encounters locals and travelers serving as catalysts to events that may or not be linked, or even actual.

Sometimes it’s just best to give in and go along for the ride. This excursion is more akin to the rehashing and combining of significant, perhaps poignant memories for “the Man” to consider rather than a journey that’s creating new ones. “The Man” seems to naturally wander through loss and regret, reliving major events in his life while sifting through minor details associated with them. The characters he meets along the way appear to be people he’s known, or possibly even serve as memories of himself.

There is almost no dialogue throughout, assuring that Steve Coogan and Rob Brydon would not have signed on for this trip. But somebody as skilled as the veteran Hinds does not require the verbal expression—his face does the speaking. But it matters little here, as he mostly mimics what it’s like for someone deep in contemplation. And, like passengers, maybe that’s the look on our faces as we view his world going by.

Given that the disparate moments in the film contain fragments of meaning peculiar to “the Man,” it reminds us of the challenges in grasping what we may put emphasis on. Even a map can befuddle us.

At least we have a clear idea of where to put a hat.