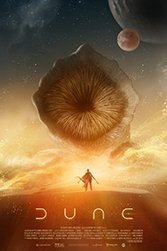 Film is by its nature larger than life. Science fiction filmmaking takes that a step further by trying to create realities so different and so unimaginably grand that they act as archways inviting the viewer into a separate dimension, a task that has become far more feasible in an era of special effects that to some extent rivals the birth of industrial modernity itself.

When Frank Herbert wrote his Sahara-planet fantasy in 1965, most though it not filmable. But in 1984, in the “Star Wars” era, director David Lynch, brilliant with the bizarre, gave the book a whirl, and came away with egg on his face. Herbert’s ambitions were simply too great to copy, let alone parse in a script, and everything about it flopped (and Lynch never did return to sci-fi, sticking with the surreal).

Cometh French-Canadian fantasist Denis Villeneuve, who over the last decade has proved no challenge is too great to tackle, and has also toyed with idiosyncratic sci-fi (half-baked “Arrival” and the powerful “Blade Runner” sequel).

His “Dune,” four decades post-Lynch, is a visual stunner of such scope it seems at times to be taking the idea of building a credible parallel reality seriously. In another era his film would have been venerated as the work of a deity. In terms of world-building, his “Dune” may be peerless. It can seem, if such comparisons are even necessary, like Kubrick’s “2001: A Space Odyssey” and Lean’s “Lawrence of Arabia” stacked atop each other, but with sand and space and strange creatures of every sort. The planet Arrakis, as it is portrayed here, is in every way a credible world of its own.

The author Frank Herbert toyed with metaphors and symbols aplenty. He was obsessed by the oil that resided in immense quantities under the sand of Arab nations, and in his novel transformed the oil into a precious spice coveted by all.

So what, then, is this film about? Let’s stick only to the principle story-line.

Timothée Chalamet is, in this literally otherworldly universe, Paul Atreides, scion of the desert planet’s House Atreides (in Herbert’s era, the Middle East was still all about kings, and Saudi Arabia still is). Oscar Isaac is Duke Leto Atreides, his father, who has hatched a risky plan to seize the vast desert, for decades in the hands Harkonnen, the tyrant who by lording over the desert controls the spice, known in the novel as melange (here Herbert mixed oil with LSD).

It would seem Arrakis is in for a sea-change in its desert order, but that is not in fact what lies in store. All hell breaks loose, and Villeneuve gets just what he wants and needs: further room to roam around his planet and take up matters of politics, of good and evil, and the not-so-little matter of the giant worms. By the end, all is just coherent enough to suggest a multi-movie franchise has been born (the flick ends mid-sentence, so to speak).

“Dune” makes “Avatar” seem like a childish trifle. Instead it feels pleasantly like an adult’s film, which makes a world and takes its inhabitants and their ideas seriously. If you want a break from this woe-stricken planet, head for Villeneuve’s — though you may not be entirely comforted.