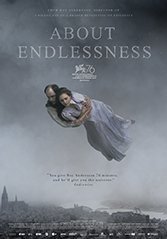 A painting may capture a single moment in time, but given some contemplation, the overall narrative can endure. Likewise in film — and Roy Andersson’s “About Endlessness” — it’s more about what is not being shown than what is.

While Andersson’s masterful style of framing shots around naturally lit open compositions could resemble the Impressionists, each character’s unremarkable fashion and commingling shades of somber browns and grays make the film’s background atmosphere more universal. His vignette approach in earlier films — “You,” “The Living” and “A Pigeon Sat on a Branch Reflecting on Existence” — also show thirty-two mostly incongruous brief takes (none greater than three minutes and thirty seconds) that help us imagine what it must be like if paintings came to life.

His intermittent narrative patterns recall a person’s visit to an art gallery. Observations begin with the childlike innocence of “I saw a man…” or “I saw a woman…,” but end with a percipient statement on different aspects of the human condition. The minimal dialogue that occurs captures the gist of what the characters have to say, rather than all that they might. Reductive, repetitive words blend with simple colors, lines, and shadows.

The film’s existential theme of endlessness is, well, endless. The pacing of each static-like scene teases eternity. One involves a couple sitting on the park bench overlooking the city. The evasive and dichotomous nature of time stretches slowly beyond the vastness of the landscape until one character finally mentions that it’s September. The other character mutters something unintelligible, as if to say there’s nothing people can do about the passing of time. Even the resounding, deliberate gaps between statement and response are cavernous.

And that’s only when there is dialogue. Like a signpost to further dread, another scene depicts an open road cutting through an expansive terrain. A clearly frustrated man looks cluelessly under the hood of his car, which has stalled. Confirming that there is nothing around for miles, he says nothing. Saying anything at all would be futile.

When we experience an emotion in our daily lives, it may feel that the moment might last an eternity. Although this highly evocative film at times slows to a gallery crawl, the undeniable beauty of Andersson’s paradoxical images reminds us that ultimately everything, bad or good, doesn’t necessarily last forever. That takeaway in itself is worth the visit.