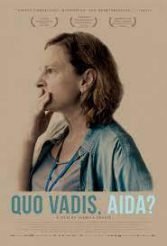 In “Quo Vadis, Aida?”, Aida Selmanagić carries a massive burden. She must commit to her duties as a translator and help protect her town from devastation during the Bosnian War, while discreetly using her position to keep her own family safe above all else.

The film, based on actual events surrounding the genocide of approximately 8000 Muslims from Srebrenica, opens with Aida (Đuričić) and the mayor pleading with UN Colonel Karremans (Heldenbergh) for protection from the impending arrival of the Bosnian army under General Ratko Mladic (Isaković). UN airstrikes against Mladic’s troops have for some reason been delayed, causing the colonel to realize the safe zone under his protection is doomed.

The villagers must eventually make their way to the nearby United Nations base for safety, but negotiations between the steadfastly methodical Mladic and the eroding United Nations leadership deteriorate. When Aida learns her special UN clearance will allow her to safely evacuate the base — but without her family and the others from Srebrenica — her already desperate situation only becomes worse.

The intense challenges that the central characters face demonstrate just how dire the situation is. Yet, as with many films of great suffering on a massive scale, an individual character like Aida or her husband Nihad (Bajrović) doesn’t only reflect their own personal emotional distress, but must serve as a conduit for thousands of others in the background who are potential casualties of war.

Making that work in film is not an easy task, but it is one that Žbanić, Đuričić and company handle most efficiently. The more we get to know Aida and other central figures, the more they’re juxtaposed with close-ups of hundreds of other faces doomed to a harrowing fate.

That silence delineates a large part of the tragedy depicted here. Genocide is an attempt to rapidly reform the present so there’s no chance to tell the stories that may prove the inhumanity of those who see aggression as a moral duty. It’s as if history itself is not even given time to remember.

This is not a film to see without the awareness that one of the purposes of stories is to remind ourselves of innocent lives lost. And, as in this case, we become more enlightened about the cruel nature that exists in the world, not to mention how we all share Aida’s determination to protect the ones we love.