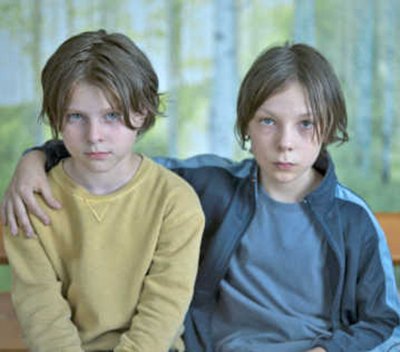 Seven year old Nora, whose older brother Abel is being bullied by his classmates, asks her teacher why adults allow such things to happen. Her teacher responds, “We don’t know what to do.” A big thing to admit. Perhaps no more honest statement can be made anyone responsible for the care of children.

“Playground” is about the impossible condition in which children often find themselves. Children are taught to respect authority, to take their problems to parents and teachers, and yet what life teaches them is the opposite. Authority figures turn out to be fallible.

At first, Abel (Duret) is keenly aware of the image he must maintain in order to keep the school bullies from singling him out. He tells Nora (Vanderberque), who wants nothing more than to be his shadow, to stay away from him during recess. But of course the lonely Nora does not listen; she seeks him out anyway, and he pays the price for it.

The bullying is not sensationalized; nor is it gratuitous. It is presented simply as what children do. Wandel even manages to make it come across as the everyday antics of children. But of course a closer look shows it to be otherwise. In the main, Wandel is interested in mapping Nora and Abel’s journey across this treacherous land of social interaction — a territory which adults may claim to understand, but have well and truly forgotten.

In fact, adults, much like the audience of a movie, can only watch from the periphery while on the stage the actors play out their various roles. This reminds us of the powerlessness of authority; just because someone is in authority it doesn’t follow that they must do something to change the situation, or that they can, or even that they have the willingness to act.

Children are repeatedly said to be resilient; yet, that’s usually just an excuse adults make because they’ve failed to make things better and need to assuage their conscience. The victims of bullying often have no one that they can depend, and so are left to fend for themselves. And this is a fact bullies are well aware of.

As for the long term effects of bullying, thinking of that is not enough to make anyone take action now.

There’s an undeniable honesty in innocence — and innocence of course is what makes us most vulnerable. This innocence is portrayed with such precision by Vanderbeque and Duret that the film appears more like a documentary.

Documentary or not, “Playground” gives us an accurate picture of the reality of bullying. And it does so especially in its questioning of authority.