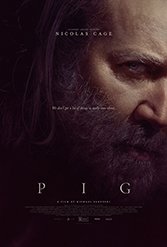 genuinely sublime film is like discovering a true truffle, deep in the forest. Unfortunately, “Pig” is more of a false truffle.

This debut feature film contains many of the right ingredients to subvert the formulaic revenge genre and replace it with something less vacuous. Loss, myth, redemption, and acceptance are all in there. Yet the harder the film attempts to fuse these elements, the more it fails to deliver any complex piquancies.

Cage plays Rob, a man living off the grid with his truffle pig outside Portland, Oregon. He sells whatever truffles he painstakingly gathers to Amir (Wolff), a young, self-absorbed buyer working for his domineering father Darius (Arkin). After local drug addicts attack Rob and steal his pig, he sets off on a quest to retrieve her. This begins an odyssey initially recalling the “John Wick” or “Taken” franchises, but, to Sarnoski’s credit, soon turns into a retelling of Orpheus. The search to be reunited with his pig leads Rob to many revelatory establishments, including the underbelly of the restaurant industry with its restaurant fight club, and a popular high-end gastronomic restaurant named Eurydice.

Sarnoski and company know just how to keep the film from becoming a commercial knockoff. He and co-writer Vanessa Block serve up elements of overused violence dramas only to change directions at every turn. Cinematographer Patrick Scola skillfully captures the opposing auras of the wilderness and urban areas to keep things visually tenable.

Yet, although the film is adequately constructed, its eagerness to distinguish itself from the mainstream prevents the viewer from reaching a credible level of emotional engagement. Like deciding what to serve in Eurydice, knowing the difference between an art film and an action film does not guarantee the ambrosia of a master chef.

The film becomes nothing more than a clean plate for Nicolas Cage to showcase the more serious, restrained side of himself. The demeanor he projects through a beard streaked with mud and blood is as rugged and authentic as aged wood, but just cannot evoke any pathos beyond that. The forced consistency and presence of the performance simply takes over and works against what else makes up the film’s recipe.

“Pig” is a good first attempt by somebody who wants to make a serious, honest movie outside the mainstream. Unfortunately, this one, like a faulty use of truffle oil, makes it something else.