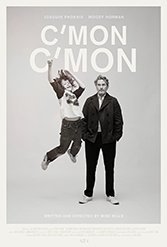 There is nothing original or groundbreaking in the use of black and white in films, and yet, depending on who is making use of the technique, it can be put to good effect. In the hands of Mills and cinematographer Robbie Ryan, this rather straightforward drama snaps with clarity — and it is clarity for which the characters yearn.

Mills’ decision not to use color in this film keeps the viewers from being distracted by too many visual stimuli. Through the use of plain black and white, Mills directs viewers to focus on the story itself and not on inessentials. Love, parenting, career, mental health, and the future are all challenges in life that often seem to be either-or propositions, yet the black and white world the characters inhabit here points to the necessitated precision in relationships previously driven by presumption.

Johnny (Phoenix) is a divorced documentarian using audio recording as a medium of choice while traveling across the country on a project interviewing young people about the future. When his bipolar brother-in-law (McNairy) relapses, Johnny’s sister, Viv (Hoffman), asks him to watch over his nephew, Jesse (Norman), whom he barely knows. When a few days becomes an indefinite period of time, Johnny, despite his obvious inexperience in child-rearing, takes Jesse along with him on a job assignment in New York City.

In fish out of water plotlines, the result is too often a contrived tale of emotional instability that sentences the movie to washed-out melodrama. However, Mills allows the energy of the uncle-nephew dynamic to become the central focus. The natural chemistry between the two actors enhances their ability to portray the growing friendship between the two characters.

Johnny’s interviews with the kids and his scenes with Jesse are supposedly improvised. Probably this improvisation works because of the way in which Phoenix is able to effortlessly connect with the rest of the cast.

Black and white can sometimes be better than color for exploring the idea of truth. The world now is so polarized that we are presented only with dualities — gender, age, race. But beyond this there is a wide spectrum of possibilities. These, however, are mostly ignored in favor of comfortable oversimplifications. It may seem counterintuitive to claim that black and white, as a stylistic technique, highlights these issues, yet it does. By doing away with the dross, it invites us to see more than what is commonly perceived.

Provided of course that one is able and willing to look.