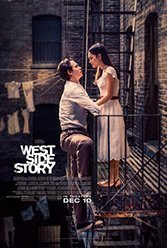 A generational divide will likely intercede to ruffle assessments of Steven Spielberg’s bold remake of this Leonard Bernstein-scored Hollywood urban opera. So let’s try to keep it simpler (though simple it’s not). On the plus side, Spielberg has gotten to the root of things, getting to the grit of Manhattan’s West Side, while making the construction of Lincoln Center into a functioning historical backdrop. He’s kept much of the soaring score intact (though the placement of some songs had been rearranged). He’s remained true to the themes of ethnic gang rivalry and forbidden love that made the original an unusual musical, and a hit.

Things get stickier when you ask yourself a simple question: Why remake a cultural classic?

The reply in this case (unlike superhero flicks) is to “sanitize” the classic so it’s in keeping with 21st-century ideas of diversity and to pay homage to the deity of open-mindedness, read historical revisionism.

And Spielberg proves himself more than up to this sanitizing task.

In this version, more on the narrative side than the musical one, Puerto Ricans, not Hollywood icons (hello Natalie Wood) flesh out their ethnicity. Spielberg has a ball bringing us up to “woke” date, even squeezing in a tomboy transgender character. If this sounds a bit heavy-handed that’s because it is.

The remake can feel as much about making amends for Fifties bigotry as a new-age bid to recapture Bernstein’s old verve.

Spielberg as always goes about his business with meticulous aplomb, knocking off another project in assembly-line fashion.

Where’s the soul? Hard to tell if a remake (especially an ensemble piece) even possesses one. New Hollywood quotas get met and some new faces shine, but, yet again, Bernstein’s raw energy — he was an ardent conformist – isn’t anywhere around. As a result, the potency of the original remains in the past, where it should have remained.

Good movie? Yes. Stirring? No. Contrivance gets the better of the whole.

To uber-cool filmmakers considering all-join-in remodeling “Gone With the Wind” (Scarlett as a still-in-the-closet mulatto) and “The Wizard of Oz” (with Dorothy as gender-neutral), please — pretty please — curb your enthusiasm.