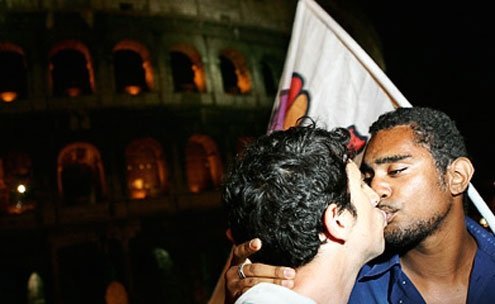 The close friend from Canada who had come to do a language exchange...
T

here is an old joke that asks, “What does a fag bring to a second date?” Well at age 42 I became tired of waiting to find out. After five years in a long distance relationship, I packed my bags, turned in my key, and went to live with my Italian boyfriend, Alberto, in Milan.

I spoke no Italian at the time. I had failed French, barely passed Spanish, and had a couple of brief bittersweet romances with Chinese and Arabic. “Why not desecrate another language?” I thought to myself. How hard can Italian be?

Part of the joy and frustration we all have when we make a commitment to learn a second language is acknowledging that not every word or concept can be directly translated. Even if you can translate a word, it’s particular use or connotation may be quite different.

Italians use some English words with their meanings intact, such as “computer” and “flirt.” Other are borrowed but assigned different meanings. It soon became my cultural mission to explain that the word “bitch” was the correct term for a female dog, and did not necessarily mean prostitute.

Obscenities have special meanings and connotations that are specific to the language and culture of origin. To my Anglophone ear, la minchia, which is common Italian slang for penis, sounds more like a house pet than a curse word. Furthermore, “la” tells you the word is feminine. Shouldn’t it be masculine by definition?

Shortly after I had settled into my new life in Italy my then boyfriend and I — already legally married (in Canada) for four years — went to lunch at the home of English-speaking Italian friends. Massimo, a doctor, his wife Lucia, an English teacher, their two adolescent boys and their four-year-old girl live outside Milan in the Italian version of the burbs.

They are like many modern Italian families who adhere to a strange mix of seemingly inconsistent liberal ideals and Catholic traditions that I will never understand. As for the issue of having two fags over for lunch with the family, it never ceases to amaze me how the obvious can be overlooked in favor of a more “hetro-friendly” explanation. So there it was, I was the “close friend from Canada who had come to do a language exchange.”

Our conversation was light, both in English and Italian. Everyone enjoyed practicing their English with a native, and I appreciated an afternoon with English subtitles.

At the end of the meal my hosts offered fresh figs for desert. I had never seen, much less eaten one but I was willing to try. The skin was ugly reddish-brown and the insides were a particular fleshy pink. Cut in half, it looked more like meat than fruit. I can’t say that I liked the taste either, even though it was the kind of thing that I might learn to like after 20 years. To be fair, my fig was over ripe and slightly fermented.

The rest of the family was amused by my reaction to the fig. As they continued to gobble them up, I innocently asked for the name of the fruit in Italian.

I choked on my fig, hoping I had misheard what she had said. Maybe she had suddenly changed topics and was discussing the German philosopher Kant. By the time I cleared the piece of slightly fermented fig from my windpipe, Massimo, Mario and Matteo were all taking turns practicing their pronunciation of the word cunt.

“Oh, no,” I exclaimed, “that’s the baddest word in the whole English language!” My composure and grammar had completely fallen apart.

Meanwhile, Lucia was attempting to engage me in an academic discourse about the derivation of the word cunt. She explained, “The inside of a fig looks like a cunt so we use the feminine form of the word, fica to describe a cunt.”

“But in English that word is the worst thing you can call a woman!” I protested.

In the background Massimo and the boys were still practicing and laughing harder each time they said the word. Suddenly the little girl appeared pushing a toy dog in front of her and sweetly chirping “cunt, cunt, cunt.”

“Oh, I’m not really sure there is a male equivalent,” I said barely glancing across the table at Alberto. He smiled.

We both knew that we were the worst thing you could call a man.