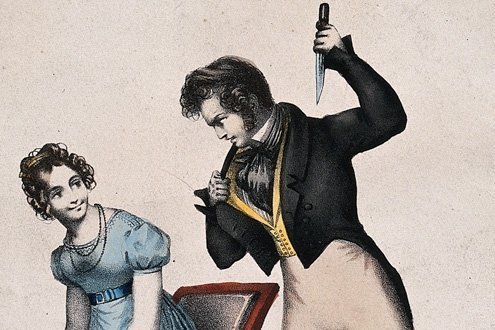 Il n'y a pas de danger (or, "do not worry..."), reads the caption of this 19th-centurt print, in a time when unrequited love and self-harm were complicit in attempting to gain romantic attention.
S

elf-harm is among most distressing and seemingly incomprehensible things that people do to themselves. It can take many forms. People can cut, binge, vomit, take drugs or use work to spiral into exhaustion.

The reasons are many. For some, the physical pain distracts from the mental pain. Some feel suffering as so boundless that it fills the entire world. They hurt themselves just to feel the very physical boundary of their skin that contains that self.

Some, like Deborah in the autobiographical novel “I Never Promised You a Rose Garden,” did it to prevent even worse damage, to create what she called “backfires” intended to check the volcano raging within her. She would savagely scratch her whole arm with a torn piece of metal to see if she could feel the pain, to know if she existed, to determine if she was “of this world.”

Deborah had no illusions. You can’t stop a forest fire with a bucket of water. Yet in some respects self-harm is failed attempted to fight fire with fire. I never understood the phrase until the father of a friend of mine, a fireman, explained it to me. There are times when massive forest fire simply can’t be stopped. But if fire fighters create a controlled burn — lighting a ring around the blaze some distance away — no fuel will remain when the larger fire arrives, stopping it. Since controlling the secondary ring can be hard enough, the practice is used only as a last resort. Self-harm is similarly a last resort to fight the blazing fires that burn within some people.

What can cause this kind of behavior? Overwhelming distress plays a major role. Maybe a child was ruthlessly teased or made to feel evil or bad. Distress can also come from severe manipulation, from sexual and physical abuse, or from witnessing violence (or being exposed to events — death, murder, war, torture — that are too much to bear). In the absence of any soothing figure, a trauma endures. And a vacuum in human connections allows it to flourish. Even a persistent lack of soothing itself can result in the symptoms.

Acts of self-harm, surprisingly, are really ferocious attempts to soothe the self.

Normal soothing begins in our earliest baby days and weeks, with a mothering figure who understands our feelings. She (or he) pays close attention to our moment-to-moment expressions, backing off when we’re too stimulated, making sounds to relax us, or touching us in a soothing way. Strength and gentleness decreases the bad feelings, whatever their source.

Human connection is fundamental. It happens when, screaming and writhing, we’re scooped up into the strong and comforting arms of a grownup. The grownup talks to us softly until we’re calm. This act is repeated constantly during infancy and early childhood. The fact that a person is doing the soothing — not a drug a ritual or an action — allows the child to internalize that person and make the relaxing cycle his own.

But if the soothing connection is absent and no one responds to a child’s suffering, his over-stimulation will grow until he’s crying and screaming and eventually falls asleep from pure exhaustion. The child will then turn to self-styled methods. None will ever be fully successful but they will require constant repetition and escalation, like addictions. Some babies bang their heads on their crib, others hold themselves and rock, while still others masturbate compulsively, or produce some repetitive behavior that numbs them. These efforts may work temporarily but eventually break down because of the absence of a calming human to identify with, to take in, to become a part of their selves. There’s no dialogue, just a monologue, a behavior.

As adults, such children, distrustful of others, will still not know how to soothe themselves. They will often hide from people and conceal their self-harm for fear it will be taken from them, exposing them to the raging fires of emotion.

It might seem like the hardest kind of problem to solve. Surprisingly, however, these symptoms can be alleviated and gradually abandoned — but only if they’re not seen only as symptoms that need elimination. These symptoms demand respect. They must be seen as essential. Their essential function must then be served instead by a new human connection (possible even into adulthood). As human soothing intervenes, the symptoms are eventually abandoned. Given our human needs, that transformation isn’t so unusual.