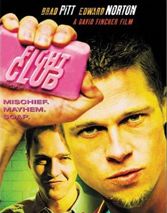 What director David Fincher (“Se7evn,” “The Game,” “Panic Room”) can’t do to make good on Chuck Palahniuk’s impossibly layered novel he makes up for in the ferocity in this dazzling genre-busting movie. Meek Edward Norton Jr., who narrates the film, meets testosterone-laden Tyler Durden (a perfectly brawny Brad Pitt); both, it seems, are every day men. But Durden gets the girl (Helena Bonham-Carter as Marla Singer), makes the rules, and bosses the world into fascist submission. He pits men in Darwinian contests that becomes the “Fight Club,” a cult phenomenon with its own very precise rules. From the narrator’s awed perspective, Durden is a legend in his own time, a hero. Why is it then that the narrator and Durden seem so much alike? What bonds them? And why does no one ever see them together.

The novel gets meaner by the page; tightening its noose. The film instead leans on narrowing the gap between the principles, and ups the current with wild visuals. When the narrator wants to be Durden, the movie neatly explodes. The movie and book are different creatures entirely, but both are exceptional.