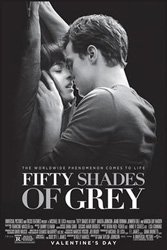 Take a virginal, 21-year old college student with a focus on Romantic-era literature and engineer a chance encounter with a wildly successful and conveniently handsome 27-year-old businessman and it comes as no surprise that he might sweep her off her feet. But wait, he’s into kinky sex? Even better.

British director Sam Taylor-Johnson’s adaptation of E.L. James’s now notorious novel “Fifty Shades of Grey” makes no effort to generate the subtlety the novel does without. Instead, we get Anastasia Steele, or Ana (Dakota Fanning), and Christian Grey (Irish actor Jamie Dornan) playing out what amounts to a romantic soap opera with benefits, i.e. bondage. Things get started when Ana, a student at Washington State’s Vancouver campus, agrees to help out flu-stricken journalism major roommate Kate by taking her place and interviewing entrepreneur Grey. Ana drives her beat up VW bug to Seattle, appearing in front of sleek Grey company headquarters looking every bit like a sixth-grader.

The interview is a disaster by any known journalistic standards, but Ana’s awkward innocence charms Grey. Yet the interview scene deserves its just due. Here’s Gray, who credits his business success to the fact “he’s good with people” and is “interested in what incentivizes them,” staring at Ana as she stares blankly back while sucking on the Grey company pencil he gave her for notes. She nods blithely while forgetting to take them.

For those who like this sort of thing, be advised that the movie is the first in a trilogy. That should be enough to incentivize future viewers. Or, to further quote Grey: “I want you sore, baby.”